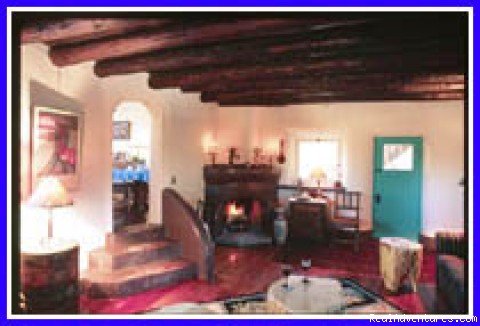 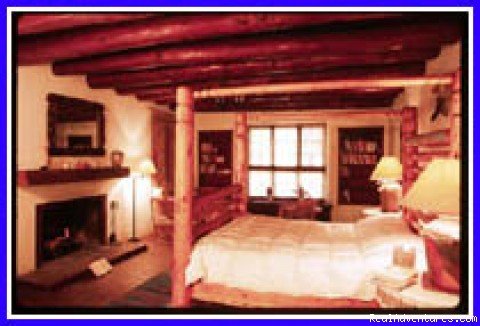 Previous
Next
Inn of the Turquoise Bear B&B - Santa Fe Santa Fe, New Mexico
On the Witter Bynner Estate, the Turquoise Bear offers superb accommodations in a romantic setting close to the plaza. This adobe villa is surrounded by gardens and tall pines. On the National Register of Historic Places. Superior amenities.

The Inn of the Turquoise Bear occupies the home of Witter Bynner (1881-1968), who for decades was a prominent citizen in Santa Fe, actively participating in the cultural and political life of the city. Noted as a poet, translator and essayist, Bynner was a staunch advocate of human rights, especially of Native Americans and other minorities. Bynner's rambling adobe villa, constructed in Spanish-Pueblo Revival style from a core of rooms that date to the mid-1800's, is considered one of Santa Fe's most important historical buildings. With its signature portico, tall pine trees, magnificent rock terraces, and gardens filled with lilacs, wild roses, and other flowers, the Inn offers guests a bucolic retreat close to the center of Santa Fe. Bynner and Robert Hunt, his companion of more than 30 years, were famous - or infamous - for the riotous parties they hosted in this house, referred to by Ansel Adams as 'Bynner's bashes.' Their home was regarded as the center for the gathering of the creative and fun loving elite of Santa Fe and visitors from around the world (the Santa Fe counterpart of the Mabel Dodge Luhan home in Taos).

Ralph Bolton & Robert Frost, the owners of the Witter Bynner Estate, have faithfully restored this magnificent property. Their goals - as innkeepers and as custodians of the home and land that Bynner loved - are to rekindle the spirit of excitement, creativity and hospitality for which this home was renowned in the past, to protect, restore and extend the legacy of its famous creator, and to provide their guests with the experience of a unique setting that captures the essence of traditional Santa Fe. They look forward to the privilege of serving as your hosts during your visit to Northern New Mexico.

Head south CO on I-25 and take exit 284. Turn right and go 1.3 miles, turning right at the 3rd signal. This puts you on Old Pecos Trail. Then follow the Albuquerque directions given above.

Head south NM on US-285 and take the St. Francis exit into Santa Fe. At 1.3 miles turn left at the 5th signal onto Paseo de Peralta. Go 1 mile to Old Santa Fe Trail (the 5th signal) and turn right. Proceed to E. Buena Vista, 2/10 of a mile, and turn right. Turn left immediately into the first driveway.

Edna Millay - ($140 - $160) Named for Edna St. Vincent Millay, who was once engaged to Bynner. A pleasant room with a view across the grounds to the Old Santa Fe Trail. Queen bed, kiva fireplace, viga ceilings, and saltillo tile floor. Semi-private bath with shower. Opens onto small courtyard.

Willa Cather - ($99) Named for the writer of the most famous novel about Santa Fe, New Mexico, Death Comes for the Archbishop who was a friend of Bynner and a visitor to his home. Average size room with queen bed, kiva fireplace, and saltillo tile floor. Shares bath with the Millay Room across the entryway.

Ansel Adams - ($120 -  $130) The famous photographer was a longtime friend of Bynner who frequently partied in this house and took photos of Bynner and his rambling adobe home. Queen size bed, saltillo tile floor, private bath with tub and shower.

Igor Stravinsky - ($170 - $190) Named for the composer who made the Santa Fe Opera famous. A frequent visitor to Santa Fe. Stravinsky slept in this house. Originally built as lodging for Rita, Bynner's housekeeper. Queen bed, kiva fireplace and windows looking out on tree-shaded patios. Private bath with tub and shower.

Spud Johnson - ($180 - $200) Separate from the main building, this room was once the carriage house. Decorated in a Western cowboy motif. Queen bed, kiva fireplace and saltillo tile floors. Fully handicapped accessible, adjacent to the parking area. Features include a portal with a brick floor. Private bath with large, tiled shower. Named for the writer and editor of The Laughing Horse, who was Bynner's secretary/companion before he was lured to Taos by Mabel Dodge Lujan.

No smoking inside buildings. Small pets allowed in some rooms. 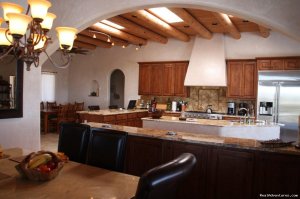 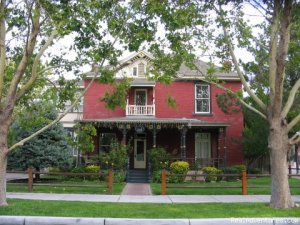 Mauger Estate B & B 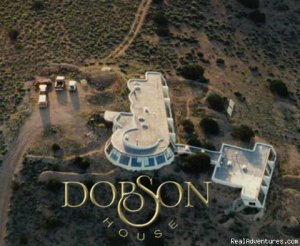 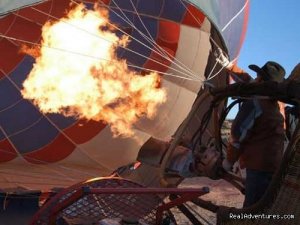 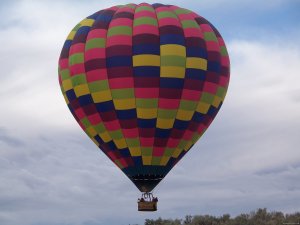 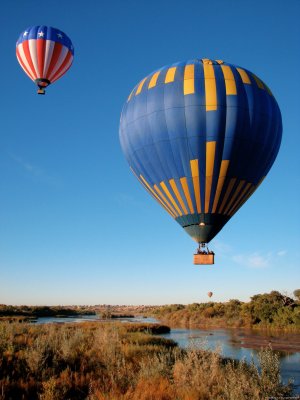 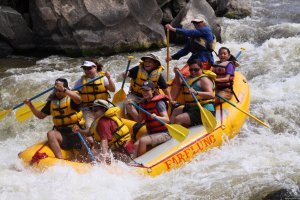 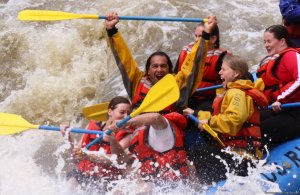 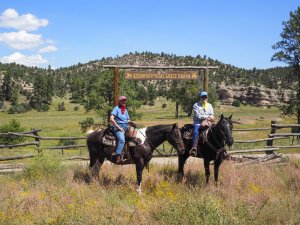 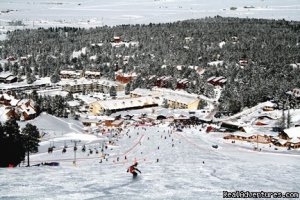