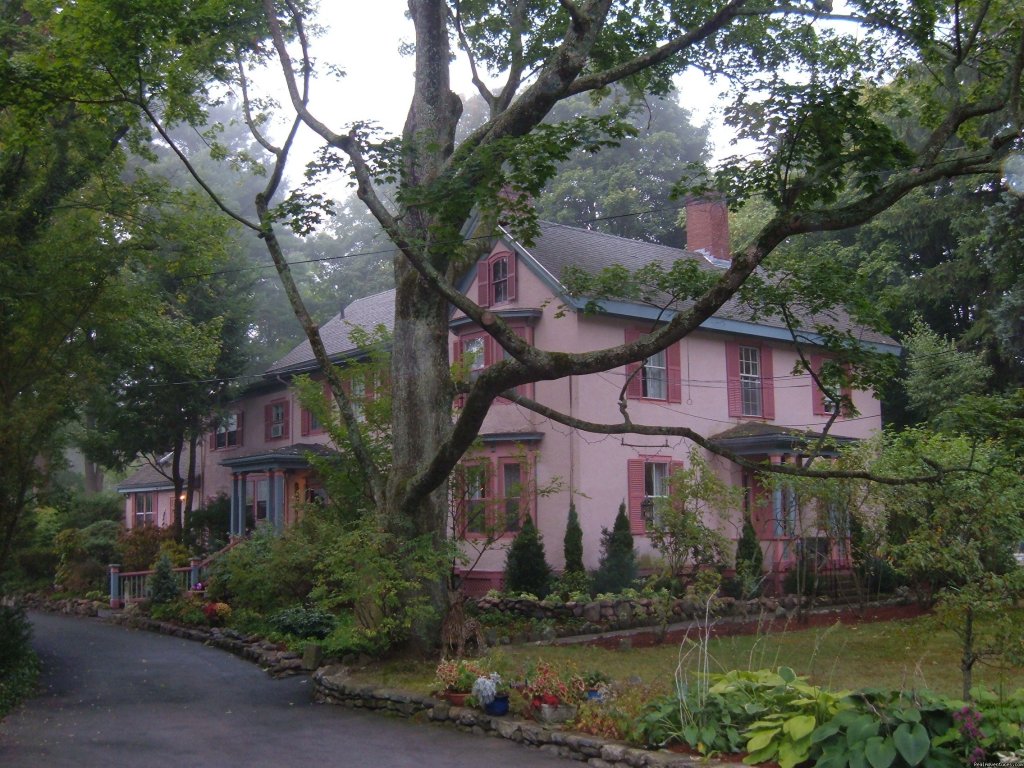 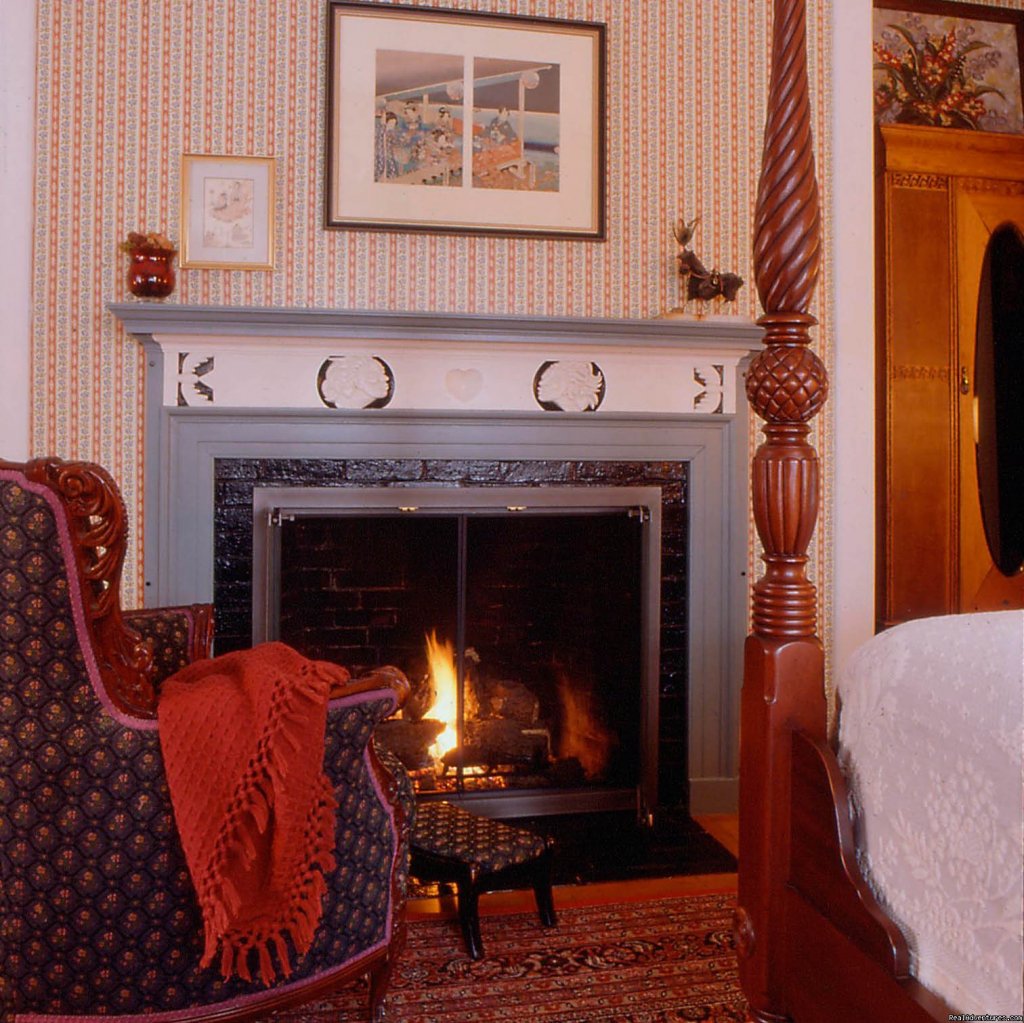 A cosy fire in the Emerson guestroom (#2/9)
Pull a chair close to your private fireplace. 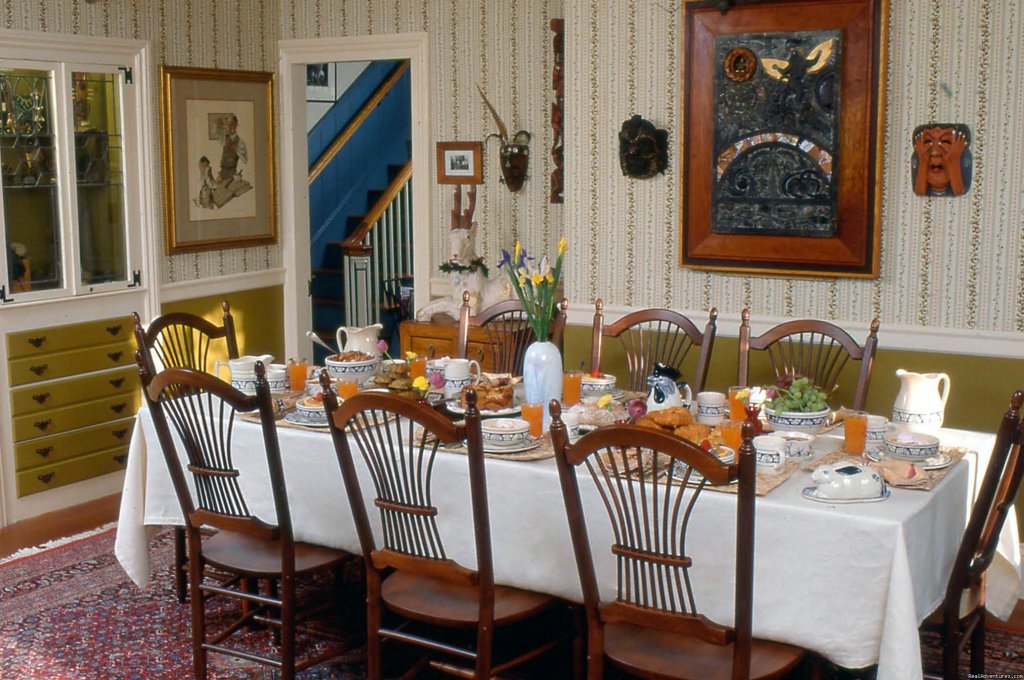 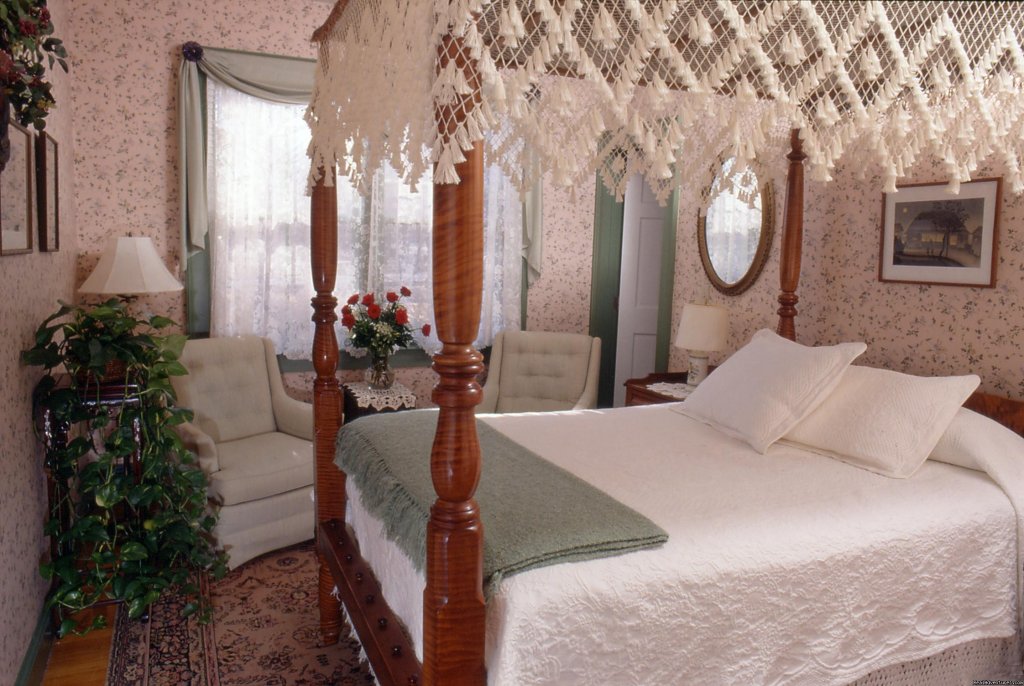 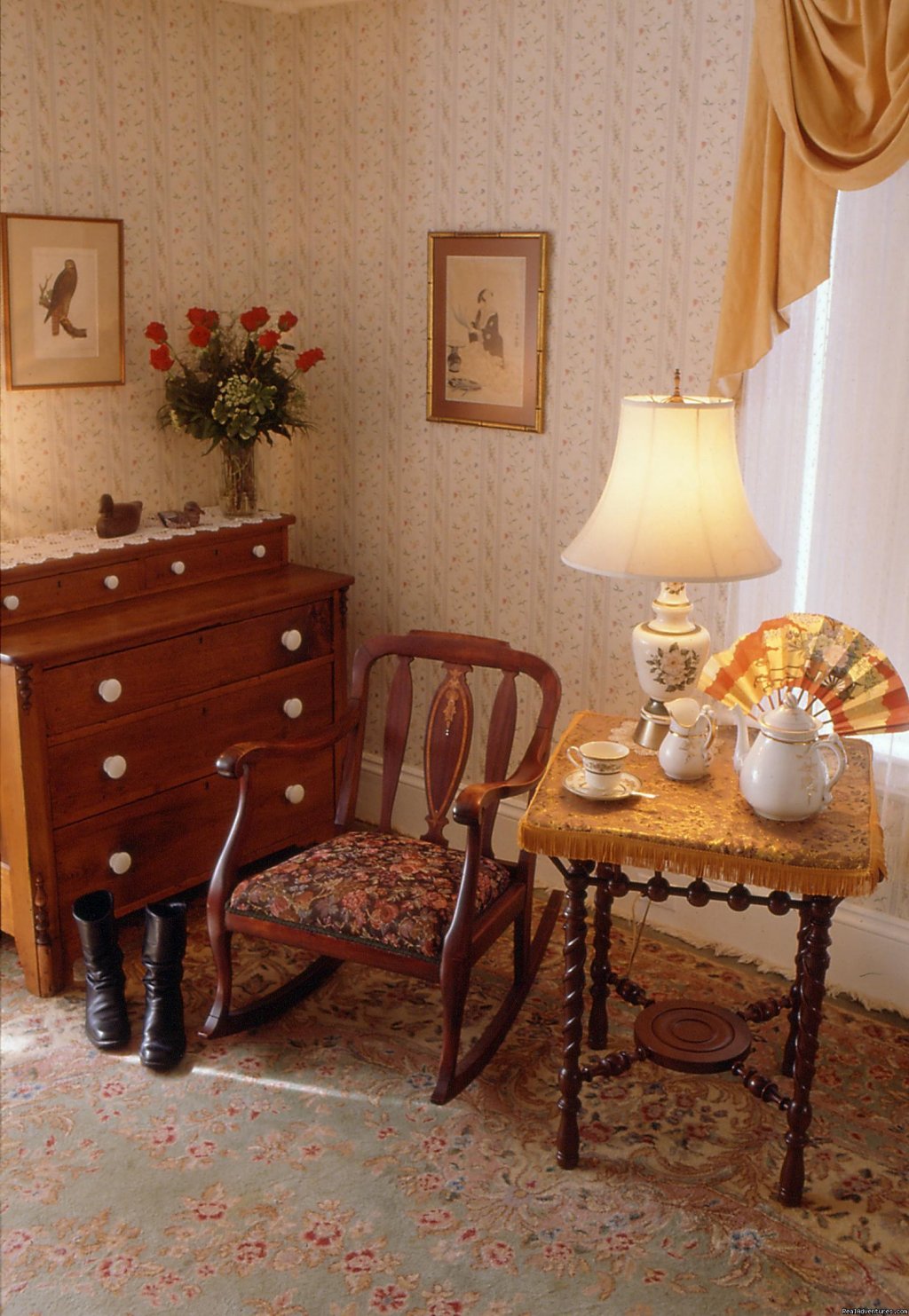 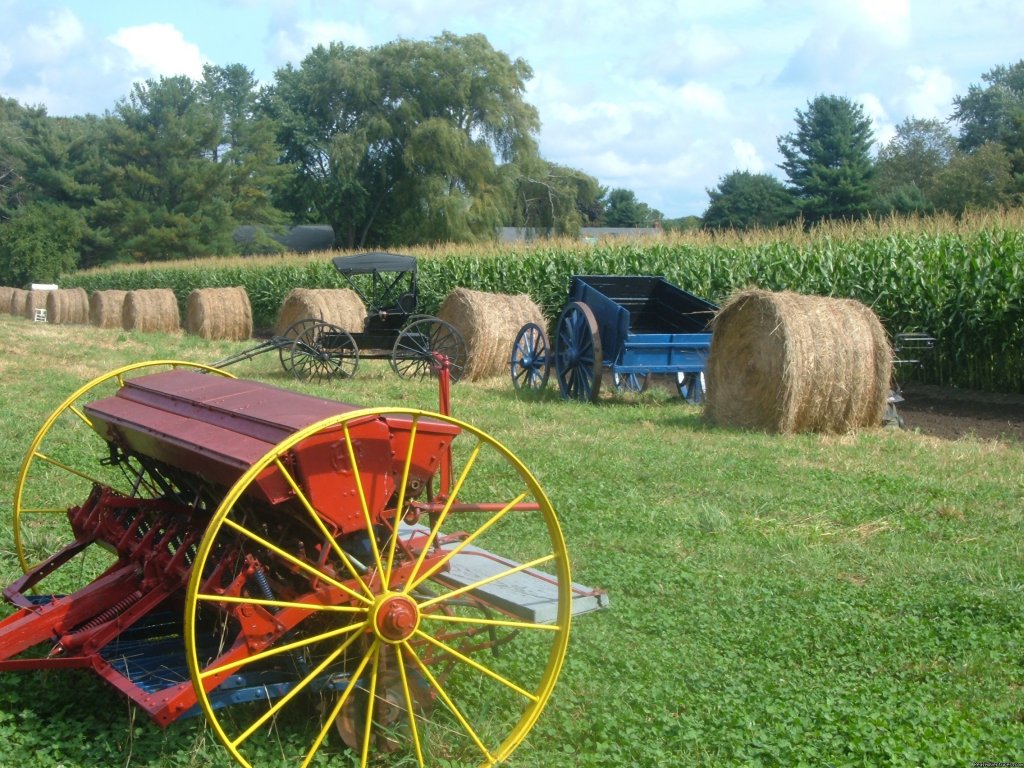 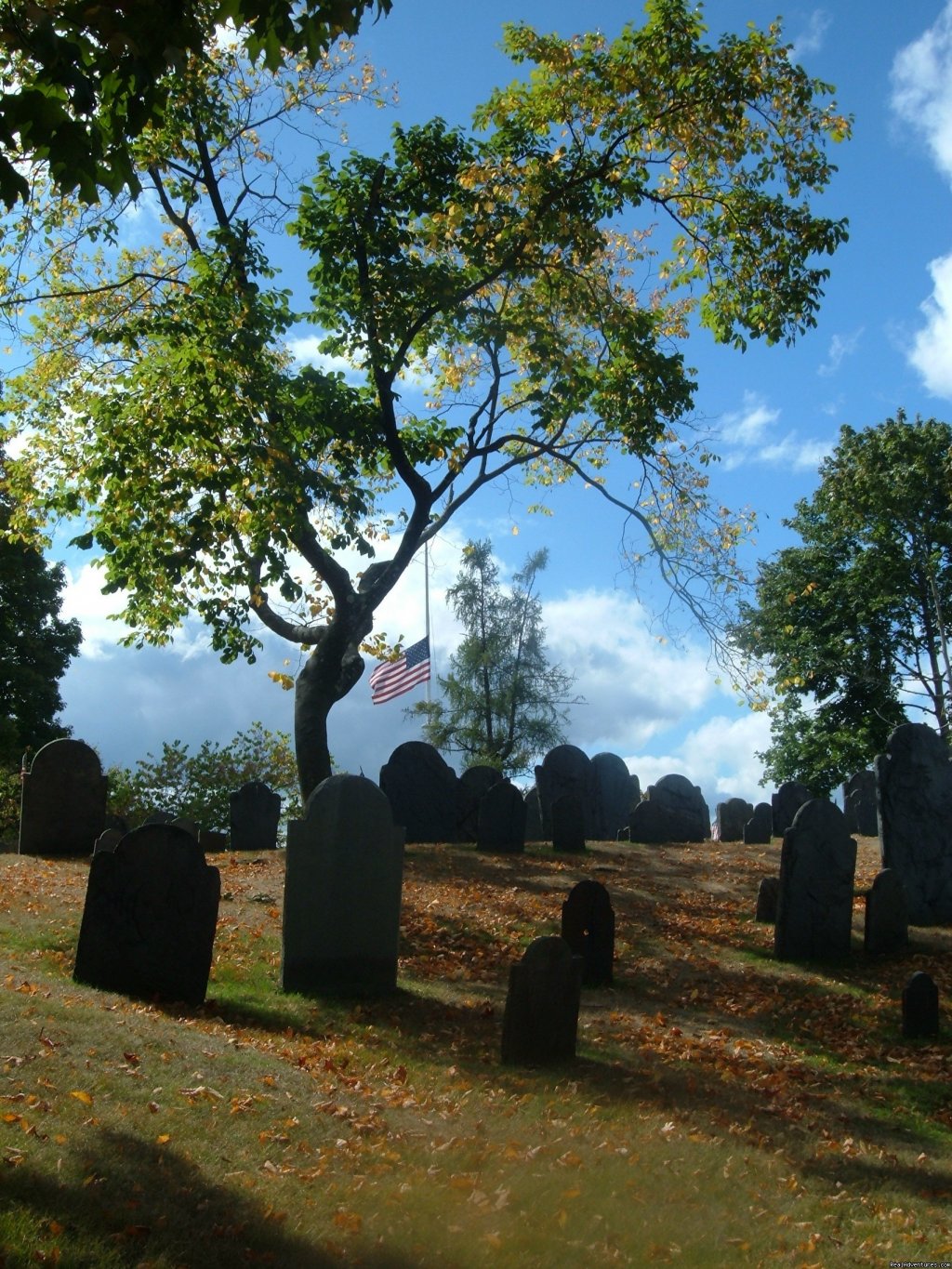 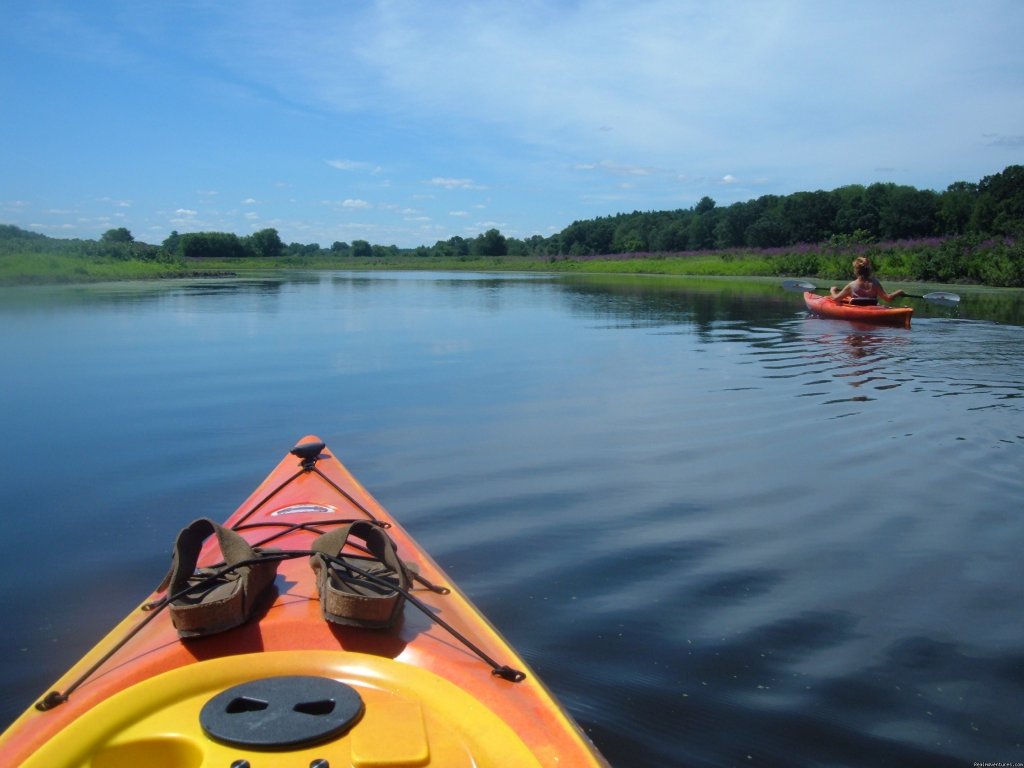 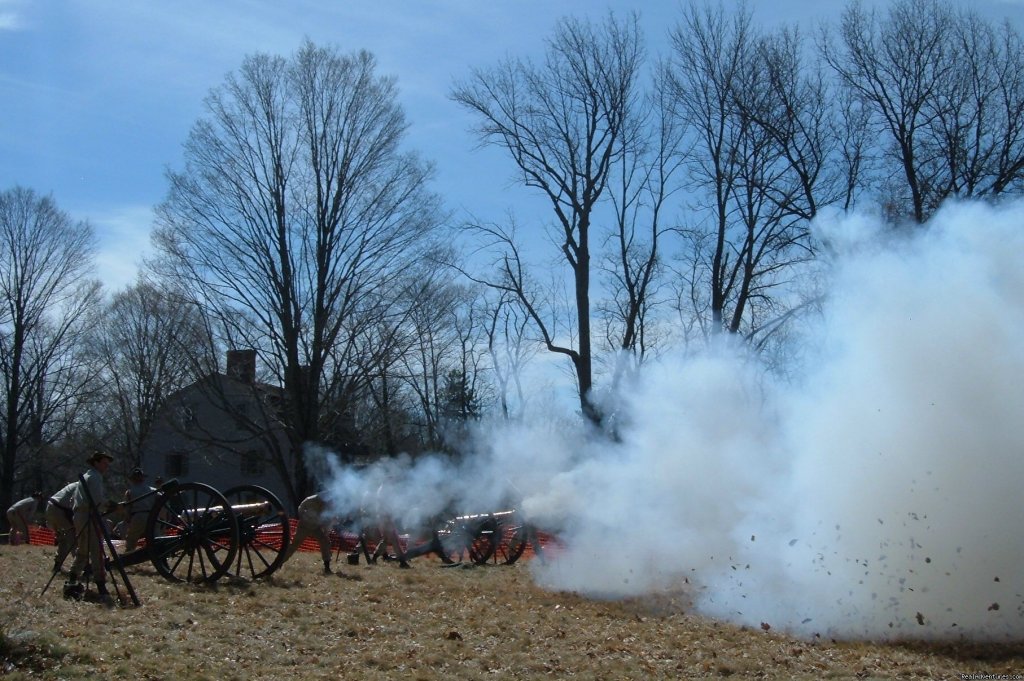 A Week's Itinerary at the Hawthorne Inn SUNDAY: Attend morning service at at a local church then walk through town center to view the site where the Provincial Congress met and, under the leadership of Hancock and Adams, the rebel government was formulated. On to the DeCordova Museum to walk the Sculpture Park and have a picnic. In the winter you might choose to cross- country ski. Dine at the historic Longfellow's Wayside Inn. Curl up with ESSAYS by Ralph Waldo Emerson.MONDAY: Put on your walking shoes and get ready to tour Concord! Start directly across the road from the Inn at Nathaniel Hawthorne's home the Wayside (this is also where Margaret Sydney wrote THE FIVE LITTLE PEPPERS). Then go next door to the Orchard House, home of the Alcott family, where LITTLE WOMEN was written. A quarter of a mile farther down the road is the Concord Museum, a treasure-trove of period rooms, Emerson's study, Henry David Thoreau's belongings and Revolutionary War items such as Paul Revere's lantern. Visit Emerson's house before walking to Concord center for a late lunch. Refreshed, walk a quarter mile to the Old Manse (here Emerson wrote NATURE and Hawthorne MOSSES FROM AN OLD MANSE) and the Old North Bridge (site of the first battle of the American Revolution). Observe the famous MINUTE-MAN statue by Daniel Chester French (who also created the Lincoln Memorial in Washington DC) before making a pilgrimage to Sleepy Hollow Cemetery to locate the resting places of French, Emerson, Hawthorne, the Alcott's, Sydney and Thoreau. Circle back downtown for dinner at one of the local restaurants. Curl up with WALDEN by Thoreau. TUESDAY: Before breakfast take an early morning walk to discover the birds abundant at Great Meadow Wildlife Refuge, just a mile from the Inn. Later spend a long morning meandering about the woods and swimming at Walden Pond. Finish your picnic and then visit the shops, bookstores and galleries around Concord center. Don't miss the Concord Art Association. Have a lobster and some steamers at the local diner and then drive through the rolling countryside to one of the many outdoor ice cream stands. Curl up with LITTLE WOMEN or LITTLE MEN by Louisa May Allott. WEDNESDAY: Explore the surrounding New England landscape as you drive one hour to Old Sturbridge Village which is a working museum representing an 1830's farm village complete with sawmill, gristmill, blacksmith shop, one-room schoolhouse and apothecary shop. An all day outing completed with dinner at the Publick House. Curl up with THE SCARLET LETTER by Nathaniel Hawthorne.THURSDAY: Enjoy breakfast early and then drive forty-five minutes to the coast and take a whale-watch out from the port of Gloucester. Landlubbers can continue their explorations on the coast road north to Newburyport and discover the Federal style captain's houses and the Plum Island National Wildlife Sanctuary replete with ocean sprayed sand-dunes, sun and salt-air. On to Salem for an afternoon at the Peabody Museum where you will find on display whaling items, ship models, China Trade goods and an ethnological collection from the South Seas. Also in Salem is the Hawthorne birthplace, the House of the Seven Gables and the popular Witch Museum. A seafood dinner at Woodman's in Essex takes you back towards Concord where you can curl up with one of the many poetry books from the Inn's library. FRIDAY: Get ready to tour Cambridge and Boston, both within thirty minutes of the Inn. You may choose to drive, take the commuter train (station one and a half miles from Inn) or, drive twelve minutes to the subway station. Metropolitan Boston is home to over forty colleges and Universities including Harvard, M.I.T., Wellesly, Brandies and Tufts. While in Cambridge tour Longfellow's house and Harvard 's various museums housing the famous glass flower collection and William Blake watercolors. Boston is a tourist Mecca, with subways, trolleys and the Freedom Trail walking tour. Start at Beacon Hill and wend your way past burial grounds, old taverns, Quincy Marketplace, the North End and Waterfront, Bunker Hill Monument and the USS Constitution (Old Ironsides). Children enjoy the swan boats in the Public Garden, the Children's Museum, the Science Museum, the Computer Museum and, the New England Aquarium. Other interesting destinations are the Museum of Fine Arts, Isabel Stuart Gardener Museum and the John F. Kennedy Memorial Library. For lunch choose an outside table among the galleries and shops of the Back Bay. Experiment at dinner from an eclectic selection of cuisine including Thai, Brazilian, Japanese, Cambodian, Cajun, Indian, Portuguese, French, Italian, Chinese and other tastes representing our ever expanding American heritage.SATURDAY: Follow the nineteenth century Transcendentalists and take a canoe on one of Concord's three rivers to commune with nature. Spend the afternoon at the Lowell National Historic Park (thirty minutes north) to understand New England's growth in the Industrial Revolution . Tour the Textile Mills and the New England Quilt Museum. For a view of an earlier period visit Plimouth Plantation (an hour and fifteen minutes south) which is a reconstruction of the original 1620 settlement. All of the guides have taken on the persona and costume of the original settlers and carry on their daily lives for your viewing. East to Boston awaits the Arnold Arboretum with its acres upon acres of specimen plants and trees. West of Concord (twenty minutes) was the Alcott's communal living experiment, now, Fruitlands Museum. Here, too, is located a Shaker Museum and a New England Portrait Gallery. Your trip near to a close have a fine meal before you curl up, pen in hand, and reflect on your wonderful trip.

UPON the Battle Road of 1775 the Hawthorne Inn was constructed c.1870 on land once hunted by the Algonquian tribes and later owned by Ralph Waldo Emerson, Bronson Alcott, Nathaniel Hawthorne and surveyed by Henry David Thoreau.WE have filled the Inn with much to share: art that is beautiful to behold, poetry and literature to entertain and to enlighten, antique furnishings to touch and use and hand-made quilts that speak of home and security.SOME might say that it is a coincidence that so much of import has transpired in this small village. We believe that there are, in this world, special places that hold power and energy and are peaceful and meditative. Certainly we have been blessed by being here and give thanks to this land for our happiness and good fortune.YOU are invited to join us and listen to the lessons that Concord has to teach. We hope that you may feel refreshed in body and, more importantly, in spirit as you utilize the Hawthorne Inn as your base for exploration.

Our seven guest accomodations are all individually appointed with a lively collection of original artworks, antique furnishings and plenty of amenities in the private bathrooms . Two of our guest rooms are furnished with [one] Double size antique, canopy bed [c.1810-1820], another room provides [one] Double Spool bed and a Single bed [c.1820]. We also offer three delightful guest rooms each with a bay-window and Queen size bed and one guest room with Queen bed and skylight. An assortment of fold-out and roll-a-way beds are available to accommodate children. The Hawthorne Inn is a smoke-free facility.

For our guest's comfort the Hawthorne Inn is a smoke-free facility. [Allergy note: our several cats occasionaly visit the Inn's common areas.] Check-in is from 3:00-9:00 PM. Please alert us if you intend late arrival. 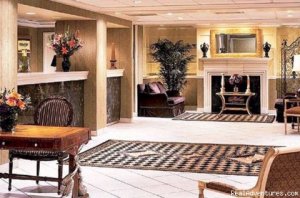 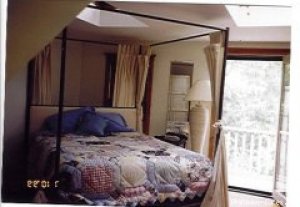 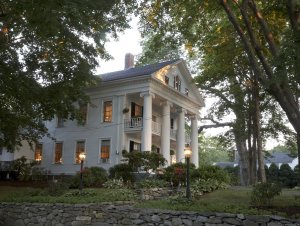 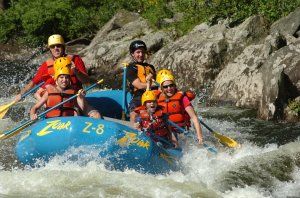 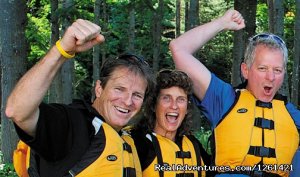 Rafting and Kayaking in Massachusetts Berkshires

Rafting Trips Charlemont, Massachusetts - 75.0 mi away
From USD $40 per Trip 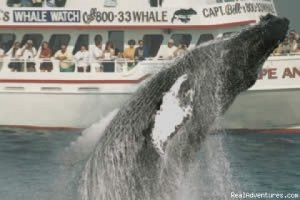 Whale Watching Gloucester, Massachusetts - 35.9 mi away
From USD $45 per Trip 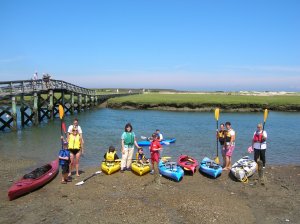 Kayaking & Canoeing Sandwich, Massachusetts - 64.7 mi away
From USD $25 per Trip 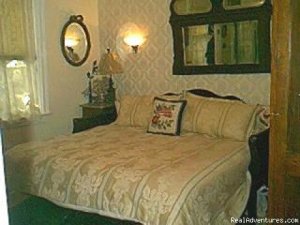 A Bunker Hill Bed and Breakfast 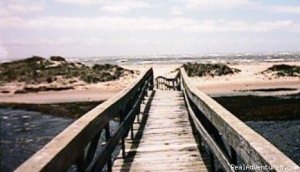 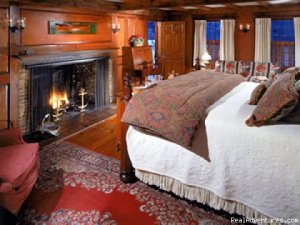 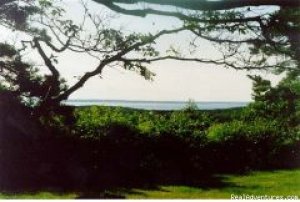