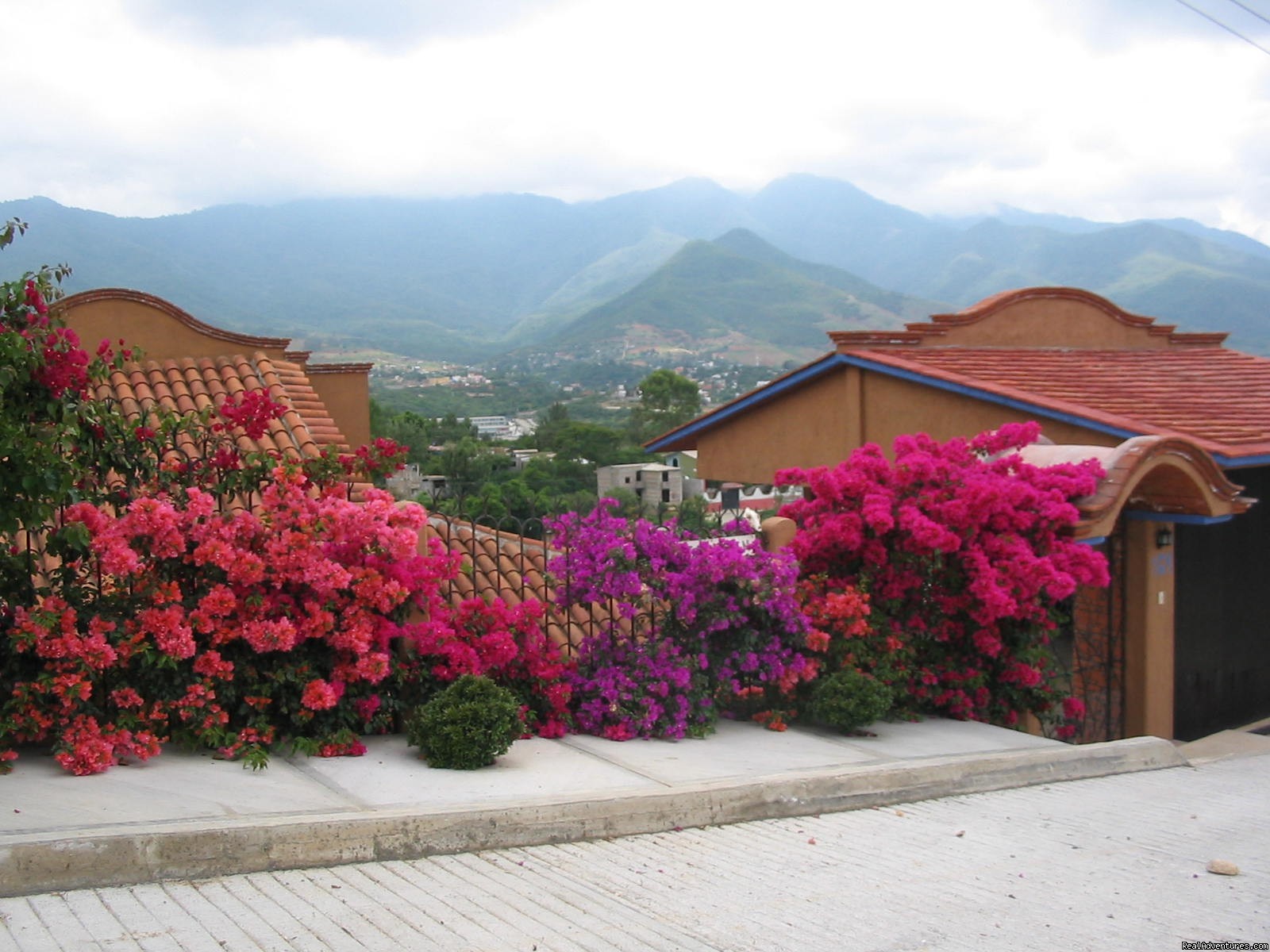 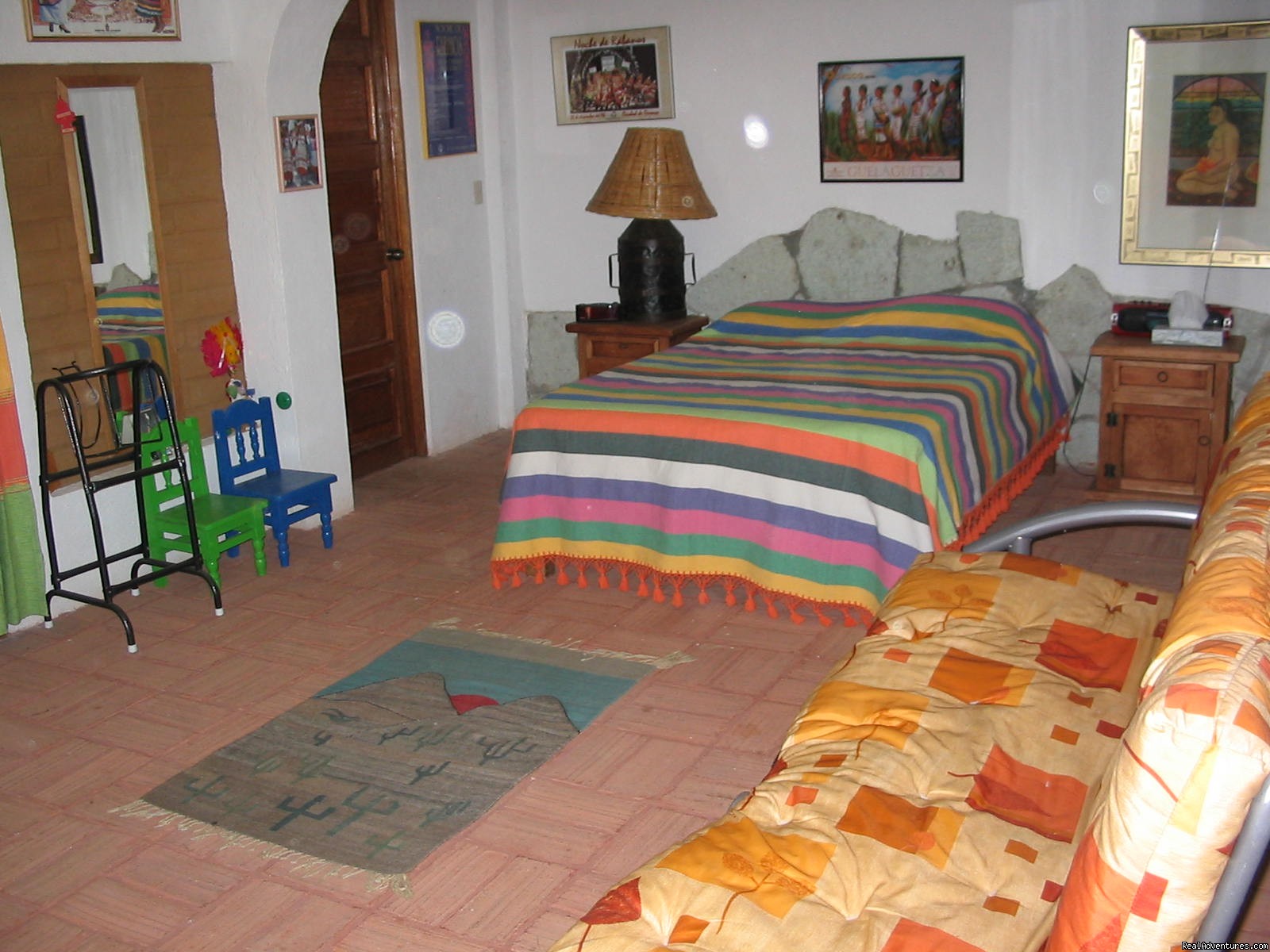 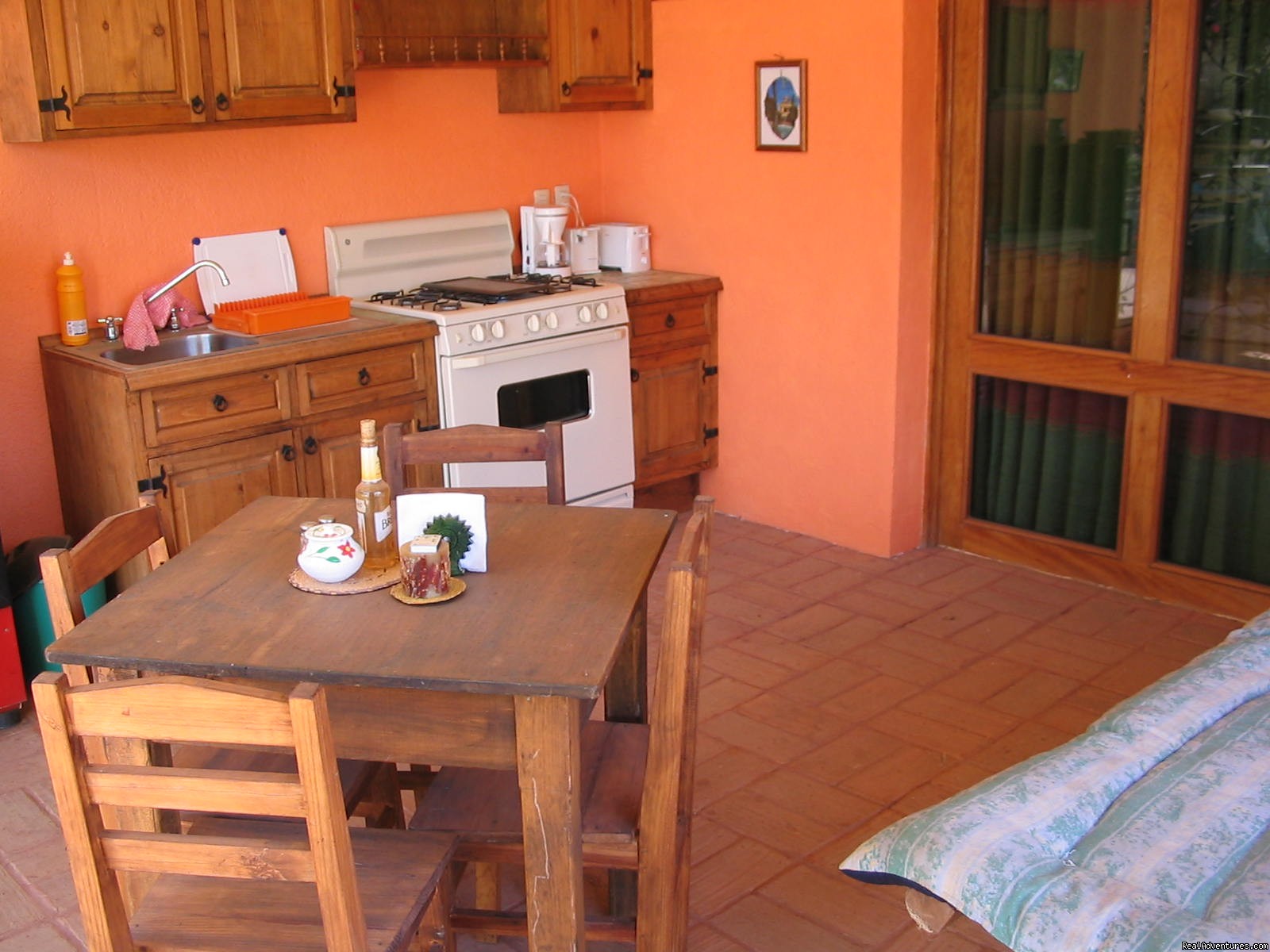 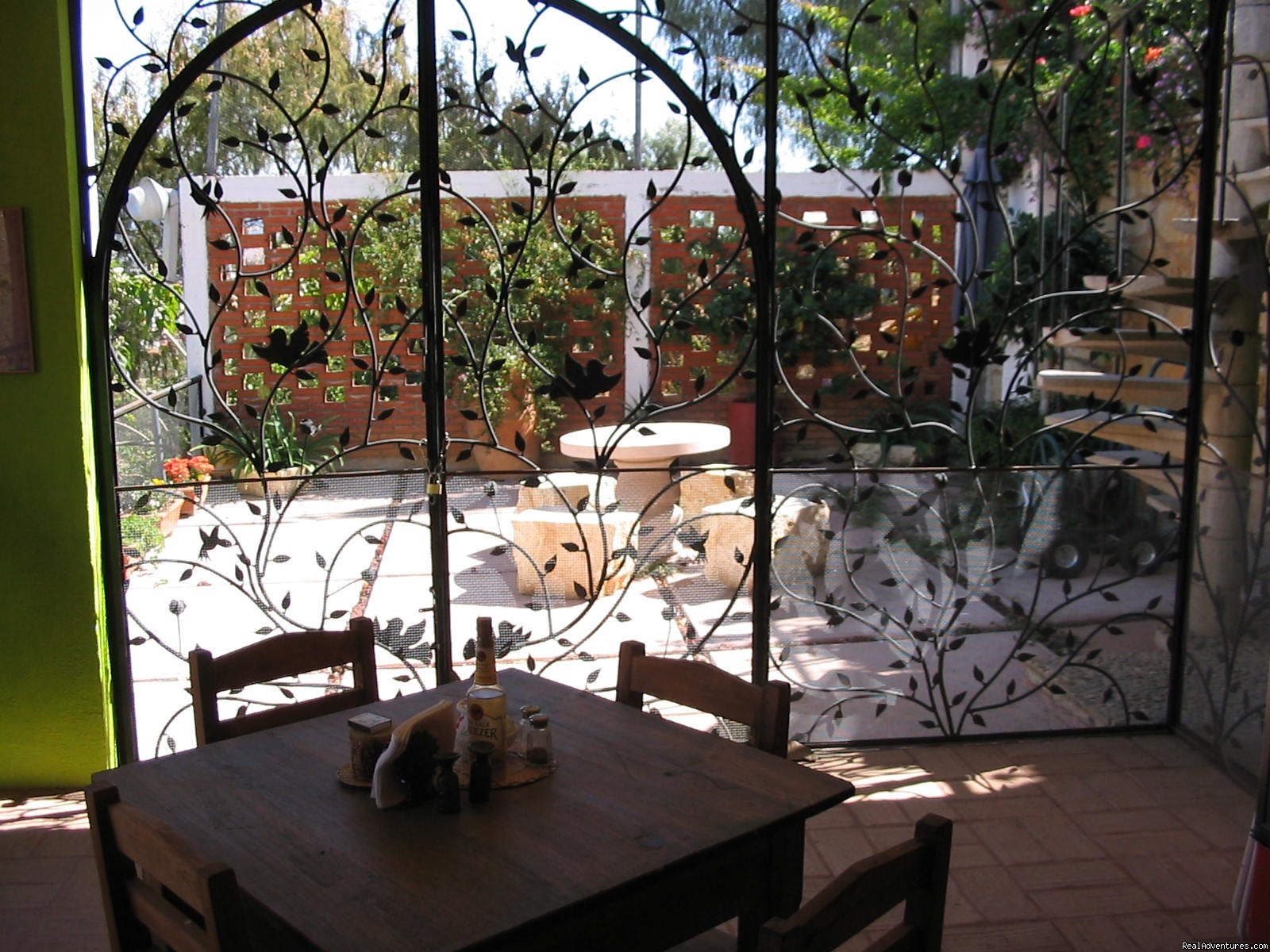 View from your kitchen to your private patio (#4/4)

Sound like the place for you?Book Now
Few travelers know that a tiny insect, native to Oaxaca, impacted the world economy for close to 200 years, after the Spanish first arrived in Mexico: the strong natural red dye from the cochineal or cochinilla, a bug living off the nopal cactus.
grana cochinilla fina…

THE BEST KEPT SECRET IN OAXACA

Most tourists have no idea that only a couple of hundred yards off the main highway, a minute or two from the black pottery village, is one the most fascinating destinations that the state of Oaxaca has to offer children and adults alike. And yet the majority of travelers have a least heard or read a snippet about the natural red dye which comes from a tiny insect and is used to color the rugs they buy in Teotitlán del Valle, and other products including some of the foods and beverages we eat today…the grana cochinilla fina, commonly known as simply cochineal.

I suspect that from reading their guidebooks or speaking to tour guides and taxi drivers, visitors are not generally made aware of the importance of this little bug on the world stage over centuries; or perhaps they think it’s enough to buy a tapete and be told it’s been dyed with cochineal, and see and touch a few dried insects…rather than spend 40 or 50 minutes in amazement. It might be different if they knew that during the conquest era, next to gold and silver cochineal was the most valuable commodity known to mankind, and that in 1758 Oaxaca exported over 1.5 million Spanish pounds of it to Europe, Africa and Asia for a multitude of uses including the dying of fabrics including uniforms worn by British nobility and cavalry.

Together known as Tlapanochestli, the quaint research facility, museum, ranch and open-air teaching environment is located at Santa María Coyotepec off a dirt road only 15 minutes from downtown Oaxaca. The attraction is designed to hold the interest of travelers of all ages and all backgrounds, from layperson to academic or professional.

Upon entering Tlapanochestli you’ll be greeted by one of the employees who works the ranch, or perhaps one of the two scientists who run the research and teaching programs, Engineers Manual Loera Fernández and Ignacio del Río Dueñas. You’ll learn about the lifecycle of the cochineal, how it attaches itself to and feeds off of a certain variety of nopal cactus, and about its harvesting and preparation for use as a dye. Both kids and grownups will delight and be awe-struck at having either a live or dried bug squished on their palm yielding the scarlet pigment. You’ll be taught why not all types of nopal cactus are suitable for production of cochineal, which ones are used to make salads, and about varietals which produce the sweet red edible fruit known as tuna, seasonally sold in marketplaces just as apples and oranges, and just as often encountered as a sorbet flavor or fresh fruit juice.

But your tour is not only about the insect and its host, but includes learning about a plethora of other natural products used to dye foods and fabrics, such pecan shells, oyster conch, pomegranate, marigold, moss, onions, and the añil plant which produces our blues and indigos. Combining some of these dyes with the cochineal results in yet a further spectrum of color. You’ll also discover how to use cochineal in combination with lime juice or baking soda and with different colored natural wools to produce orange and purple hews.

One cannot help but marvel at the diversity of commercial products which utilize the cochineal as a coloring such as lipsticks and makeup for those allergic or sensitive to synthetic red and orange tones, Danone yoghurt, Campari, and even Campbell’s soup. Often artists have opted to employ cochineal and other natural colors for their work, and accordingly witness walls adorned with examples of fine art created without the use of chemical-based paints. The photos of Prince Charles’ attendance at Tlapanochestli is a testament to the world’s continued fascination with the historical and contemporary significance of the grana cochinilla fina. In the gift shop there’s an opportunity to purchase dried cochineal for your own use, ink in an attractive wax-sealed bottle, paints and pastes, balls of yarn, soaps, clothing, and for the children perhaps a paint set consisting of dried cochineal to crush using the miniature clay pestle and mortar, along with coloring pages with instruction sheet directing how to use the kit and produce your own shades of red, orange and pink.

A short video puts the production of cochineal into its proper historical context using facts, anecdotes and mythology, along with colorful imagery, narrated using language easily understood by children. At the same time those with a background or interest in the sciences will have all of their questions answered. The film outlines the pre-hispanic use of the pigment; the development of an internationally regulated industry attracting the attention of worldwide heads of state from The Conquest forward; its importance in the global marketplace as the strongest and most brilliant dye known to humankind; and its decline in the mid 1800’s upon the invention of synthetic coloration and the subsequent adverse impact on the Mexican economy. While Oaxacan production and export never did recover from 19th century recessionary factors, the video concludes on a upbeat note documenting the industry’s resurgence in recent decades in the face of widespread health concerns regarding the continued reliance on synthetic substances to dye commercial products.

After your cinematic journey back into history, and having gained knowledge about how natural dyes are produced and used in a multitude of applications, your perception of not only Oaxaca but also the Western World will have been enhanced forever…whether you’re in Oaxaca shopping for rugs, watching the native vendors in a market or ordering ice cream; or sitting in the comfort of your home and sipping a Campari and soda.

Alvin Starkman together with wife Arlene operates Casa Machaya Oaxaca Bed & Breakfast ( http://www.oaxacadream.com ). Alvin received his masters in social anthropology in 1978, and his law degree in 1984. Thereafter he was a litigator in Toronto until taking early retirement. He and his family were frequent visitors to Oaxaca between 1991 and when they became permanent residents in 2004. Alvin conducts tour of Tlapanochestli and of the weavers of handwoven rugs in Teotitlán del Valle such as Artesanias Casa Santiago ( http://www.artesaniascasasantiago.com ).