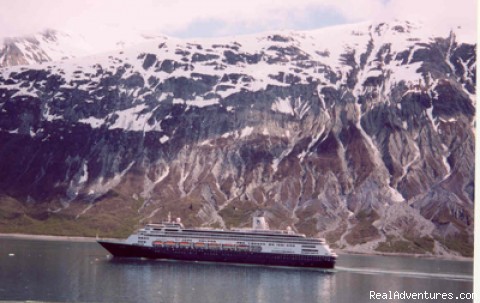 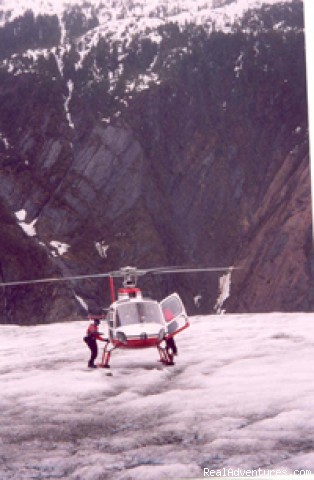 walking on a glacier 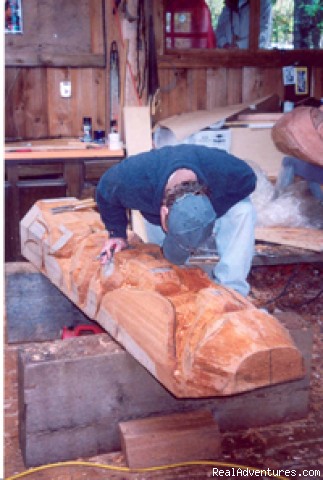 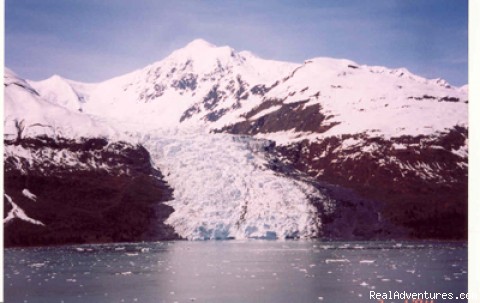 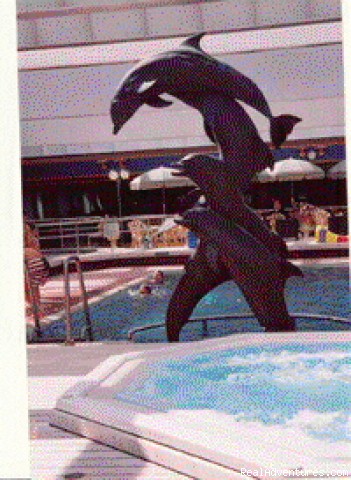 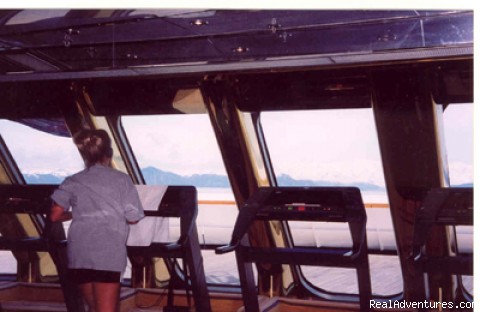 Sound like the place for you?Book Now
Cruising to Alaska is an adventure of a lifetime. Take a helicopter tour and land on a glacier, see wildlife, native Indian dancers and more!
CRUISING TO ALASKA IS ADVENTURE OF A LIFETIME

A CRUISE THAT CATERS TO SENIORS

by Phyllis and Arvin Steinberg

We just returned from an adventure of a lifetime, and we didn't have to
travel to a faraway nation to experience it. Even though we are 50 plus, we
rode in a helicopter, walked on a glacier and came face to face with amazing
and colorful marine life.

We also watched native American Indians carve a totem pole and
attended a Russian folk dance performance, and those are just some of the
highlights of our recent trip to Alaska. But let's start at the beginning.

We wanted to go on a cruise, but wanted to see more than just tee
shirt shops and sandy beaches. We had heard from friends that Alaska is an
interesting place to visit and went to our travel agent and asked for
brochures on cruises to Alaska. After studying dozens of brochures from
different cruise lines traveling there, we opted for the Holland America
line. They had six different ships to choose from and offered more than
120 cruises to Alaska during the cruising season from May to September. The
line has two itineraries: round-trip 7-day sailings from Vancouver, British
Columbia and one-way 7-day sailing between Vancouver and Seward, Alaska.

We selected the Glacier Discovery Cruise on the MS Statendam which
travels north from Vancouver to Seward, because it travels beyond the Inside
Passage to the Gulf of Alaska.

We boarded the ship at 3 p.m. and took a ship's tour to familiarize
ourselves with the amentias on board. Our tour began on the Sports Deck on
the top of the ship. There we found the Crow's Nest, a lofty lounge which
offers spectacular views through its panoramic 360-degree windows. One floor
below was the Lido deck, with a swimming pool and a sliding-glass
retractable roof which opens and closes depending on the weather, a wading
pool and two whirlpools. There was a buffet poolside where passengers were
enjoying hamburgers, hot dogs, and other casual fare and a bar where people
were sipping sail-away drinks. We stepped through sliding glass doors on the
Lido deck and discovered the Lido Restaurant, with raised seating and floor
to ceiling windows. We were told that we could enjoy an informal breakfast
or lunch or late night buffet at the Lido Restaurant. The Lido deck contains
a state-of-the art fitness facility and an Ocean Spa with a beauty salon,
massage, steam and sauna rooms. One deck below we found the Explorer's
Lounge for after-dinner drinks, a library and the Rotterdam Dining Room, a
stunning two-story dining room with an exquisite glass ceiling. The ship
also has an elegant two-story nightclub. We then located the gift shops,
casino, and a nifty Internet Cafe where we could check our emails and log on
to our favorite internet sites.

We were glad the first full day on the ship was spent at sea. Being
50 plus, we needed a day to recuperate from our day of air travel. We also
used the time to select the off shore excursions for our trip. Holland
America has more than 75 shore excursions offering passengers many exciting
opportunities for fun at ports-of-call in Alaska-- from seaplane flights
over waterfalls and granite cliffs to fly-fishing, snorkeling and mountain
lake canoeing. They also have kayaking and helicopter glacier expeditions,
dog sledding and panning for gold. It was hard to decide which tour to take
from just reading a brochure, but Holland America's shore excursion
director, Maureen Ricker, was a big help. Ricker gave a lecture and slide
presentation on all of the excursions offered for passengers. And those who
missed her lecture could turn on the television set in their stateroom and
watch a detailed presentation of all of the shore excursions.

The tours were rated for the amount of physical endurance required and those that were
wheelchair accessible were also indicated. The tours ranged in price from $20 to $364. These costs were in addition to the basic price of the cruise.

Our first day on the ship also included a fitness routine. We got up early in the morning and went to the fitness center and had a spirited workout on treadmills. Then we participated in a low-impact aerobics class which was filled with many passengers, 50 and over, just like us. The class was fun and not too difficult and made us hungry for breakfast.

Our first port-of-call in Alaska was Ketchikan. It is the fourth
largest city in Alaska with a population of 14,000. It is known as
"Alaska's First City" because it is the first town travelers reach when
ferrying north. The city is also known as the Salmon capital of the world
due to the abundant salmon returns each summer.

Juneau, the capital of Alaska was our next port of call. This picturesque city, surrounded by mountains and streams, is also the home of the Mendenhall Glacier, one of the most spectacular natural wonders in Alaska. The 12-mile glacier, dates back to the Ice Age. We wanted to take acloser look at the glacier, so we selected the Mendenhall Glacier HelicopterTour ($184 per person).

When we arrived at the site for the glacier ride, it was raining. We
wondered if we would be able to see anything. We climbed into the
helicopter, fastened our seat belts and off we went soaring high into the
clouds. The ride was as smooth as silk. We rose from sea level to alpine
ridges in a matter of seconds. The rain didn't prevent us from viewing this
incredible journey beyond civilization. We flew over deep crevasses and
around jagged spires. Our pilot described our glacial journey through
individual headsets that we wore. Finally, we landed on Mendenhall Glacier
and had the opportunity to explore this unique environment. Expert guides
were waiting for us on the glacier in a white tent with an American flag
next to it. We felt like we had landed on the moon when we took our first
steps on the uneven terrain with its rocky crevasses and aqua surface pools
of water. We were dazzled by the bright blue color of the glacier. Our
guides also provided us with raincoats to protect us from the rain as we
walked on the glacier. We also received special boots. Our guides explained
that the glacier moves two feet each day, but we couldn't detect any
movement as we walked on its surface. The Mendenhall Glacier Helicopter Tour
was an experience of a lifetime and we would highly recommend it if you
travel to Alaska.

After our third day on the MS Statendam, we realized that the fabulous
amenities of the ship and the interesting shore excursions were only part of
our Alaskan adventure. Rather, the magnificent beauty of Alaska itself was
causing us to stop and look repeatedly throughout the day from our
stateroom, or while eating dinner, or while walking down the street at a
port-of-call. Wherever we looked, we saw snow capped mountains, or cloud
covered mountain tops, or green forests, or a rough sea turned into a sea as
smooth as a lake.

The next adventure on our cruise was visiting the immense and spectacularly
beautiful Glacier Bay National Park. The Park consists of 3.3 million acres
of mostly mountainous land. As we sailed into Glacier Bay, we were awed by
the size and beauty of the 65-mile long Bay. Snow-capped mountains rose up
from the shoreline, piercing blue skies at several thousand feet, towering
far above our 11-deck, 1,200 passenger cruise ship. The MS Statendam took us
within 1,000 feet of several glaciers and everyone gathered on deck to look
at them. There was silence in the Bay except for the occasional thunderous
sound as ice chunks broke off from the glacier and crashed into the sea.


After leaving Glacier Bay, the MS Statendam entered the Gulf of Alaska.
Late the next afternoon we reached the final adventure of our voyage,
cruising College Fjord. Blue skies and snow capped mountains surrounding the
Fjord greeted us. We saw sea otters swimming in the aqua blue, ice dotted
waters. College Fjord is eight miles long and two miles wide. It was a
breathtaking assemblage of glaciers standing several miles high with their
jagged edges against the backdrop of a bright, blue sky.

On the last day of our cruise, we had a three-hour bus ride to
Anchorage, which was filled with even more beautiful scenery and wildlife in
Alaska. We were awed by the immense size of Alaska and its thousands of
miles of magnificent unspoiled environment. We have taken many cruises to
different destinations, but none with such spectacular scenery, mile after
mile, day after day.