Step back in time at Grand Hotel on Mackinac 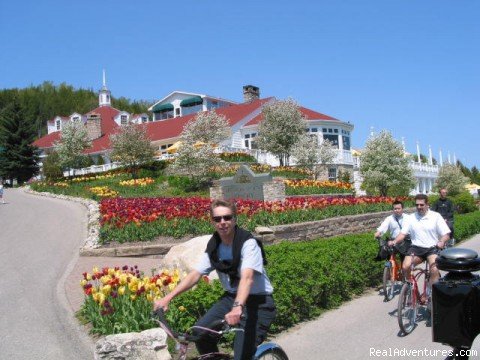 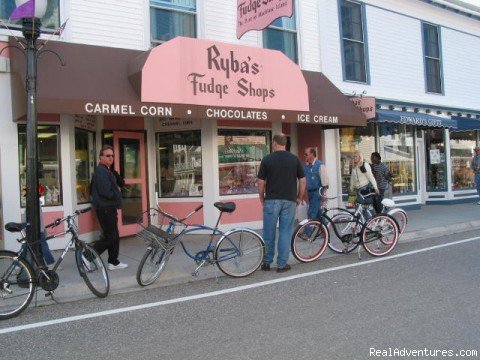 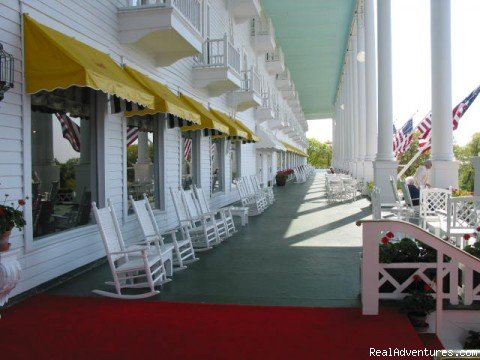 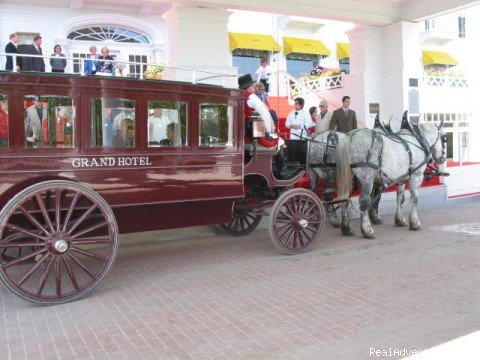 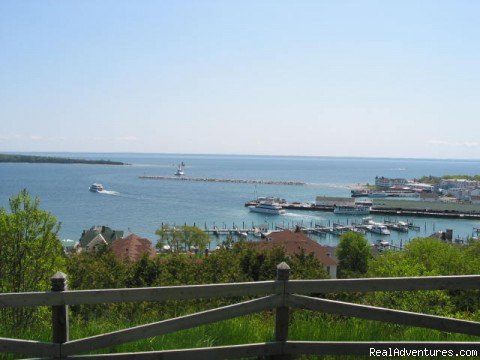 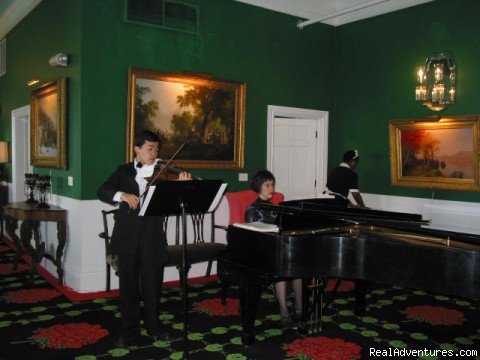 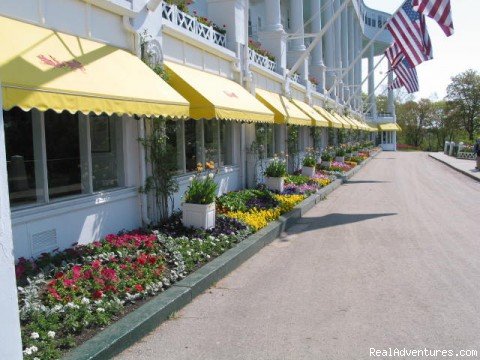 Step back in time at Mackinac Island


Hooves clatter on the narrow streets of Mackinac Island as draft horses pull creaking delivery wagons past tulip lined streets blooming with every color of the rainbow.
The founding fathers of this mid-western resort island outlawed automobiles and other motor vehicles more than a century ago.

You would almost expect to see ladies in swishing skirts and high-button shoes sipping tea on the wide porches of the wooden homes that dot the island. But this is twenty-first century and the streets are lined with men, women and children riding bicycles with the typical gear of this era. Other people choose to ride horses around the picturesque island.

Along main street are several gift shops. One of the most popular shops is Ryba’s Fudge Shop. The island is known for its fudge, a long-time traditional souvenir to bring the folks back home. Murray’s Fudge Shop is another popular purveyor of fudge since 1883, according to the sign above the shop.

The only way to get to the island is by ferry. Ferries start bringing people to the island in June and the season lasts until the fall when the weather gets too chilly to enjoy the pleasures of this small island. An eight-mile road circles the island. Six hundred horses come to Mackinac each summer and they take vacationers around the island for the small sum of $3.50.

The highlight of the island for me was staying at The Grand Hotel, an all-inclusive resort built in 1887 by two railroads and a steamship company to meet the needs of the Victorian traveler. The hotel’s builder was Charles Caskey, who used more than 1,500,000 feet of Michigan white pine to erect the enormous classic revival structure. The early commitment was to provide guests with something more than simply elegant accommodations and superb cuisine and this tradition still continues today.

The Grand Resort’s most unforgettable architectural feature is its seemingly endless front porch with rocking chairs that stretch the entire length of the hotel’s elegant faēade. People sit on the rocking chairs, sip cocktails or iced tea and look out to the beautifully landscaped grounds and the Straits of Mackinac which surround the resort.

Today eighty percent of the island is a state park. Mackinac Island was named a national park in 1875 and later became Michigan’s first state park in 1895.

The awe-inspiring sight of the Grand Hotel from the water sets the tone for a visit to the island. The pace is slow as horse-drawn carriages, bicycles and shoe leather are the only forms of transportation. However, my carriage driver said the island does have a fire department with fire engines in case of an emergency.

A five course dinner and full breakfast are included in the room rate. The favorite dessert of guests is the Grand Pecan Ball. This dish is so popular that the chef told me that more than 50,000 are served each season. Every afternoon there is a mile long buffet for lunch. The dining room is impressive. It is a 3,400 square foot room that can comfortably seat about 750 guests.

There are a few extra charges, $18 for the afternoon tea service, which is accompanied by a strolling violinist and a piano player. Evenings are elegant at the Grand with an orchestra playing dancing music in the Grand Auditorium. In keeping with the theme of the plush resort of yesteryear, guests must dress up for dinner. Jackets and ties are required for men. Women can wear dresses or a dressy pants suit.

The Grand Hotel has many memories for guests. There is the spectacular Esther Williams Swimming pool nestled among the enchanting gardens of the hotel. The heated, sparkling 500,000 gallon serpentine-shaped pool is ideal for sunning, swimming or just soaking up the beauty of a summer day. The 1947 film" This Time For Keeps" was filmed there in 1947. Although Esther Williams did swim in the Grand pool, most water scenes were filmed on MGM’s back lot.

Many weddings are held at the Grand Hotel. Although it was originally built to cater to America’s elite, today it is available to anyone who seeks an unusual summer resort experience. When I stayed there, the majority of the guests were seniors, but the resort does have activities for families and children.

I found the décor in the rooms and the hotel to be very elegant and uplifting. I would however suggest earplugs as the insulation between rooms is rather sparse. I had to call the front desk to have my neighbor turn his television down so I could get to sleep. The assistant manager promptly fixed the problem by telling the people to turn down their television, but earplugs would have been a simpler solution. The Grand Hotel allows vacationers to step back in time and to have a wonderful time doing it.

For reservations at The Grand Hotel, call 906-847-3331.
For more information about Michigan, log on to michigan.org
Photos by Phyllis Steinberg 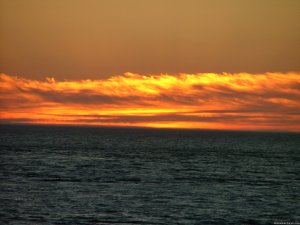 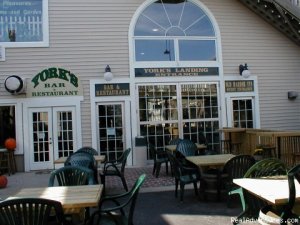 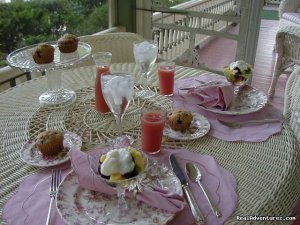 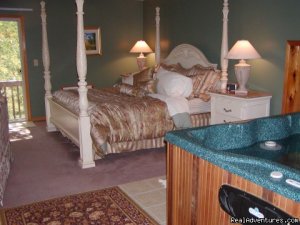 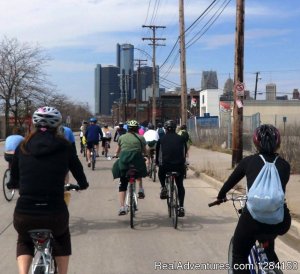 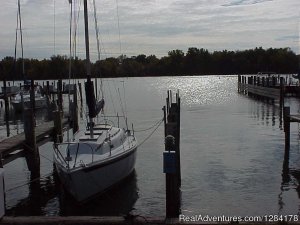 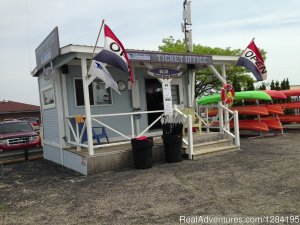 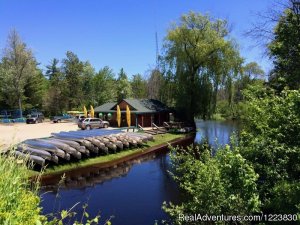 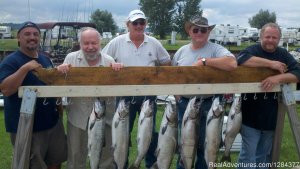 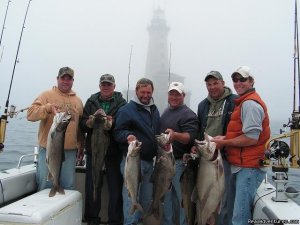 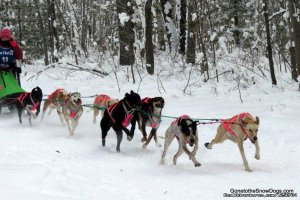 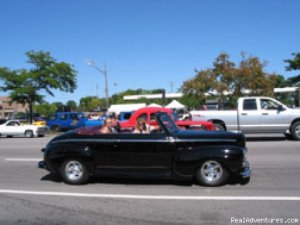 Detroit is a great place for a family vacation