Trekking and Hiking up to 4000 meters. It's an Adventurous tour.
You need to walk in 2500 mtrs up to 4500 mtrs. and walking 5/6 hrs per day.
Walking, hiking and recreations, fun and trekking, visiting the oldest Gompas and Monastries. 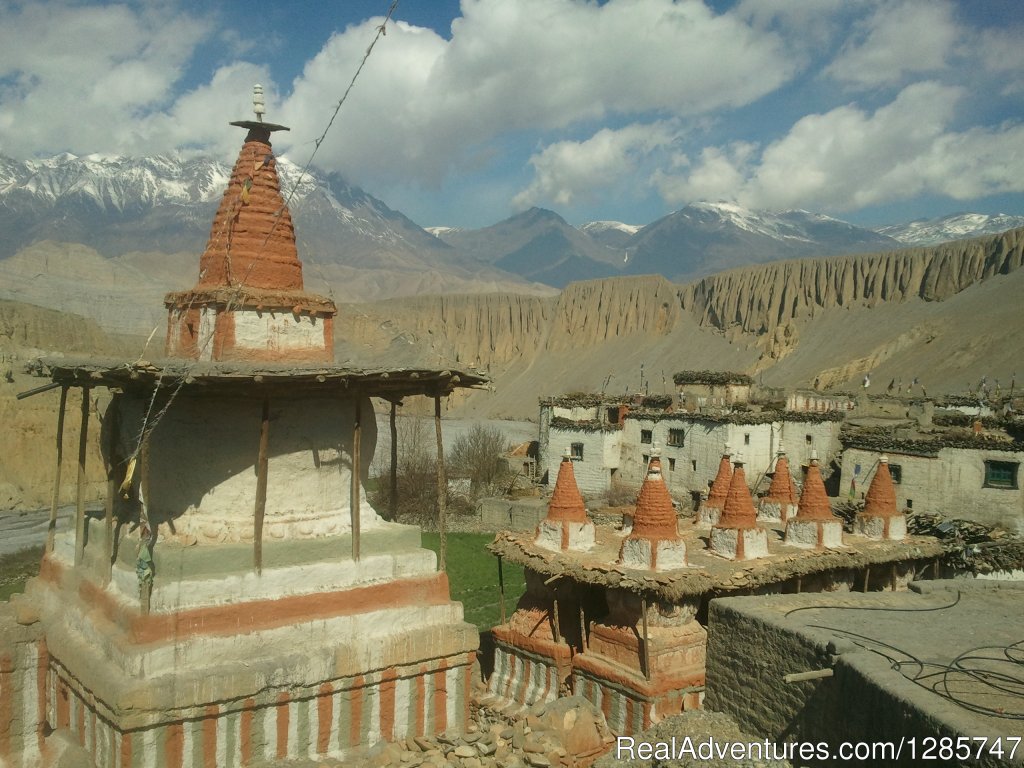 Today after breakfast we start a guided tour to several of the most historical and spiritual attractions in Kathmandu. Some of these landmarks include the World Heritage Sites: the historic Kathmandu Durbar Square, the sacred Hindu temple of Pashupati Nath Temple and Buddhists shrine (Buddha Nath) which is one of the largest Stupas in the world. In the afternoon, there will be a pre-trip discussion where we can meet our trek leader and other team members.

Early morning at around 7 am, we set off for Pokhara on a tourist bus. Enroute we will see more of countryside of Nepal that offers greeneries, rivers, villages, farms and beautiful mountain sceneries. Afternoon, we reach Pokhara. Pokhara offers magnificent views of Dhaulagiri, Manaslu,Machhapuchhare, five peaks of Annapurna and others. Pokhara is city of lakes and has numerous beautiful lakes. We can explore the most accessible and beautiful, Fewa Lake during the afternoon -enjoy boating too. (A.B.L.D)

After an early breakfast transfer to the airport for a morning flight to Jomsom, a super scenic flight of 20 minutes over the mountains with views of 8,000ers such as Annapurna & Dhaulagiri, brings you at Jomsom, the district headquarters of Mustang. This is a large town; headquarter of the Mustang region;it is also a major village on the Kaligandaki area linking the age old Trans-Himalayan Salt Trade route to Tibet. From Jomsom onwards it is very windy in the afternoon, Continue on the gradual path on the Kali Gandaki river bed for about 3 hrs and finally reaching at Ekley-bhatti village. After good stop here an hour of easy walk takes us to Kagbeni, which lies at the bank of two rivers. Kagbeni is an interesting windswept villages situated on the main age old Trans-himalayan salt trade route to Tibet via Upper Mustang area. In Kagbeni a major tributory, Kak Khola, coming from Muktinath, meets Mustang Khola,and from there the river is called the Kali Gandaki. (A.B.L.D)

DAY 05: Kagbeni to chele (3050m): 5-6 hrs Our journey starts with a special permit check up and onwards to the riverbank of Kaligandaki up stream. During the walk we have scenic picturesque place to stop through the sandy and windy trails.This trails follows the up and downhill. Firstly we reach Tangbe village with narrow alleys amongst white washed houses, fields of buckwheat, barley, wheat and apple orchards. From there we trek forward to Chhusang and after crossing the river head up to the huge red chunk of conglomerate that has fallen from the cliff above, forming a tunnel through which the Kaligandaki follows. We head on to small ridges reach at Chele village. (A.B.L.D).

we start our trek again and walk further to Eklo Bhatti. We climb to Taklam La Pass (3,624m) through plateaus and narrow stretches with views of Tilicho Peak, Yakawa Kang and Damodar Danda. Further descend a little to the village of Samar. Climb the trail that goes above Samar village to the ridge then descending steeply to a stream. Another 3 hrs similar walk takes us to Syanbochen. On the way, we relax along the surrounding of cool streams and juniper trees. Locals use the dried leaves of junipers as incenses to invite deities and start any auspicious work. We also pass by a cave famously known as Ramchung Cave. (A.B.L.D)

DAY 07: Syanbochen to Ghaymi (3520m): 5-6 hrs. we trek uphill to the Yamda La (3,850m) passing a few teahouses, chortens and local villages which is like Tibetan style of houses with open Varanda. We cross mountain passes, and an avenue of poplar trees and fields of Barley. The climb to Nyi Pass (4,010m/13,193ft) would be a little longer. Descend to our overnight stop at Ghaymi. the third largest village in the Lo region, Ghayami is surrounded by large fields most of which are barren. (A.B.L.D)


Start the trek after breakfast with a pleasant walk. After crossing Ghaymi Khola, the trail climbs to a plateau and passes beside a very long Mani wall, a sacred stone wall made by the followers Buddhism. From the end of the wall the trail heads east to the village of Charang with a maze of fields, willow trees and houses separated by stone walls at the top of the Tsarang Chu canyon. (A.B.L.D)


Today, we trek to Lo-Mangthang with a magnificent view of Nilgiri, Tilicho, Annapurna I and Bhrikuti peak. The trail first descends to Charang Chu Canyon and then climbs steeply after crossing the river. Further the trail ascends gently to the 3,850m windy pass of Lo, from where you can see the Lo-Mangthang Valley. While descending to Lo-Mangthang, views of the walled city appear magnificent with its hills on the Tibetan Border. (A.B.L.D)


Today we explore the surrounding areas. Visit Namgyal Gompa and Tingkhar. Namgyal Gompa situated on a hilltop serves as an important monastery of the local community and also as a local court. After visiting Namgyal Gompa continue the tour to Tingkhar, the last main village to the northwest of Lo- Mangthang and stroll back to hotel. Or you may have another option to visit the Tall Champa Lakhang "God house" the red Thugchen Gompa, Chyodi Gompa and the Entrance Hall which are the main attraction of this town. Another attraction is the four- storey building of the Raja's palace as well as the surrounding panoramic views of the Himalaya. (A.B.L.D)


While returning from Lo-Mangthang, we take a different route than that we came by. Trek to Drakmar via Gyakar with more than 1200 years old Ghar Gompa with Guru Rinpoche as the primary figure. The Gompa is also famous for its rock paintings. According to the legend, anyone who makes one wish at the Ghar Gompa, their wish is fulfilled. (A.B.L.D)

DAY 12: Ghami/Dhakmar to Chhuksang (3050m): 5-6 hrs
Today, we get back to Ghiling as our journey for our overnight stay after a long walk takes 5-6 hrs. You will have wonderful scenery during the journey with a Himalayan view. (A.B.L.D)


Our last day of the day would be a long one. Better to walk early start as before and trek to Kagbeni.Finishing the upper Mustang trails and we join the normal Annapurna circuit trek. After lunch at Kagbeni will head on to Jomsom for the overnight stop. Or, if you can spare one more day, our guide would take you to Muktinath as well. (A.B.L.D)

DAY 14: Fly back to Pokhara


After morning breakfast we check in the airport to fly back to Pokhara. A 30 minute flight to Pokhara between gorge of the two huge mountains Annapurna and Dhaulagiri Himalaya. On arrival at Pokhara airport guide will transfer to the lakeside hotel. Phewa lake boating and walk up to view point Peace Stupa. (A.B.L.D)

DAY 15: Pokhara to Kathmandu by tourist Bus. (A.B.L.) Or you can extends your activities like Chitwan safai and Lumbini tour and River Rafting etc. 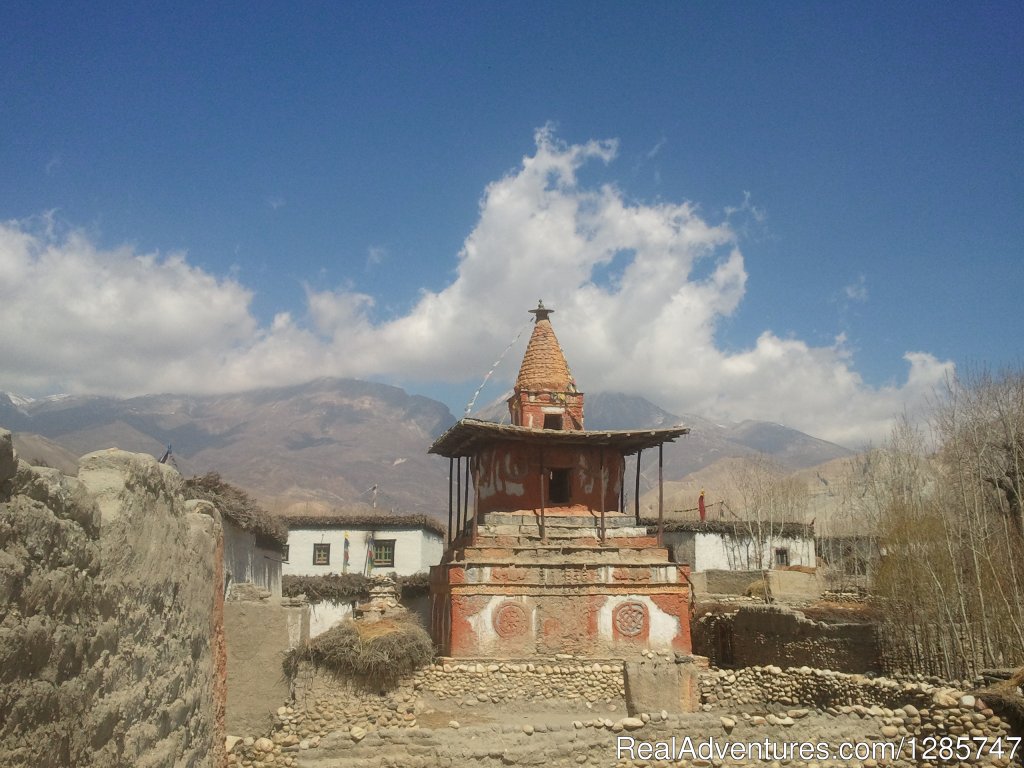 At lest 2 pax need, Family, couple, youths and kids from 7 years 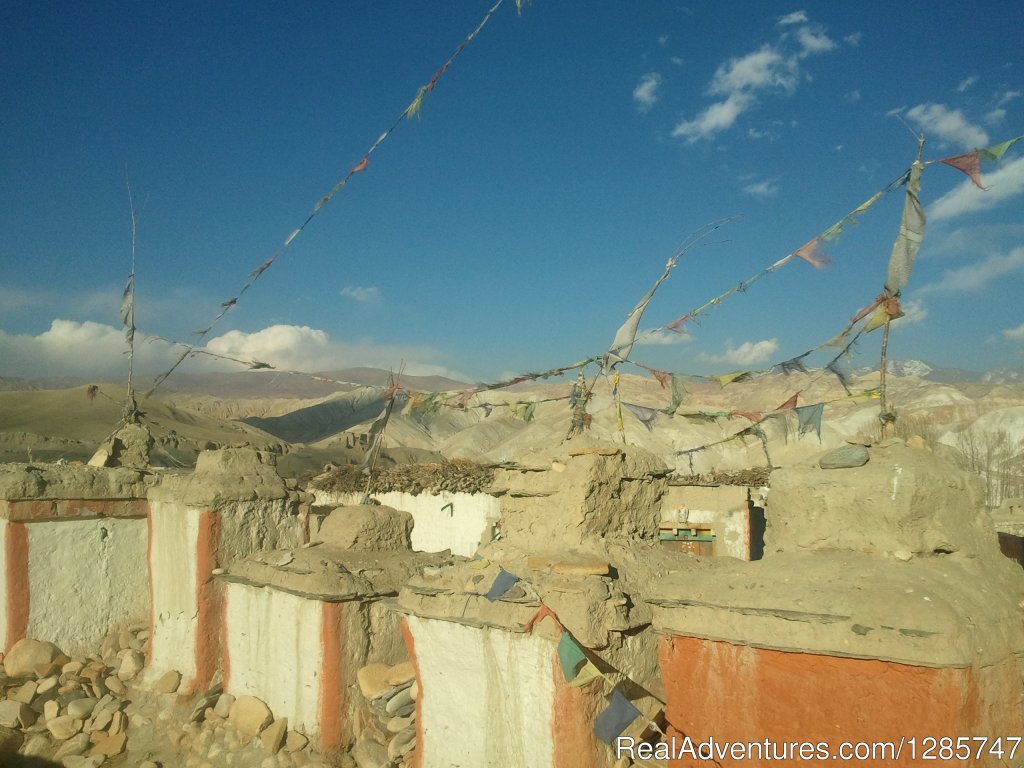 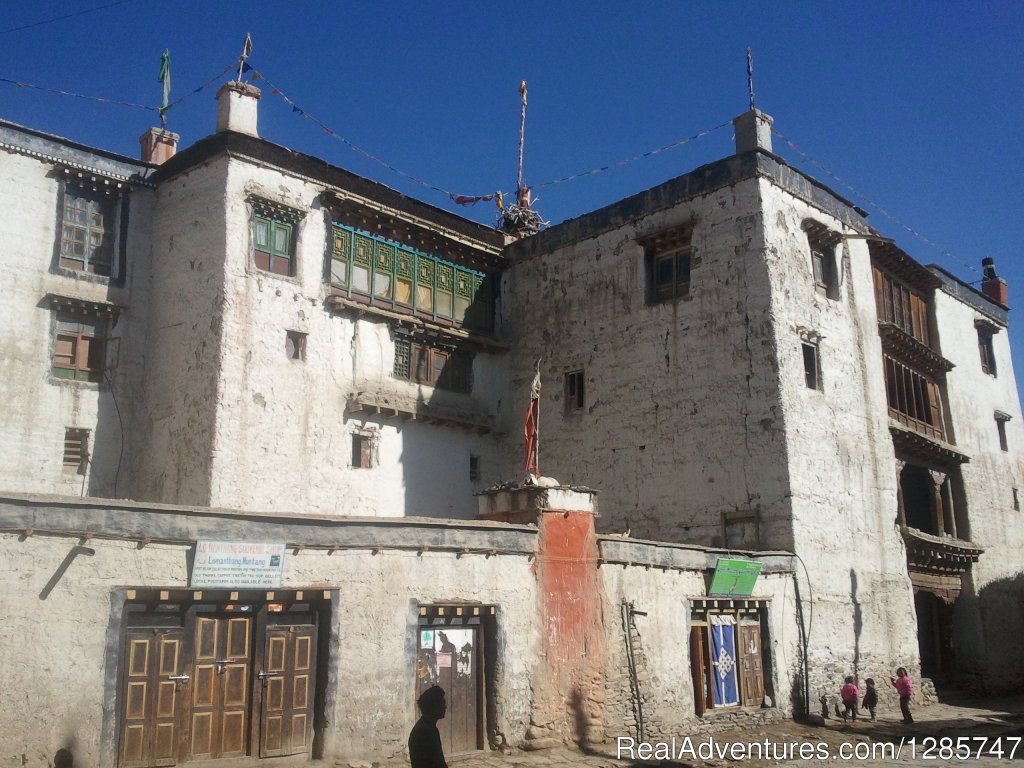 Special permits you need, no camp fires. Age from 7 and no gender restrictions but physical fit is needed. 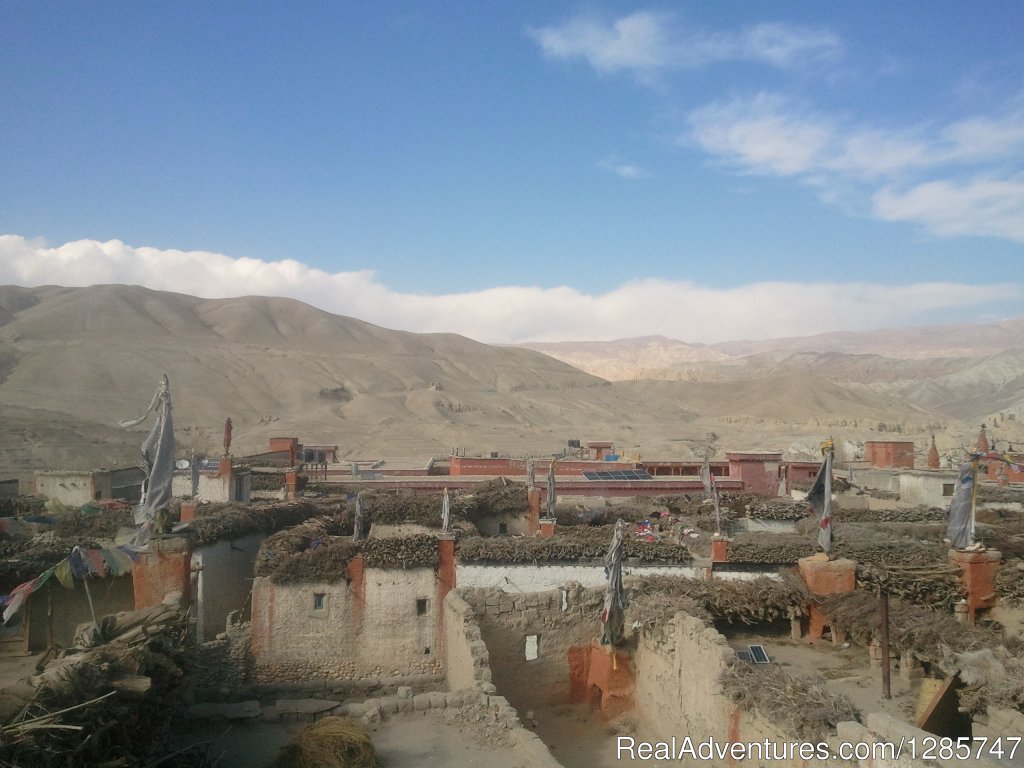 This is forbidden last kingdom in Nepal, you need special trekking permit $ 500 for 10 days. Rest $10 per week. Minimum days you need 10- 14 days for trekking and extra 4 days in Kathamndu and Pokhara. 3 week holiday would be sufficient. 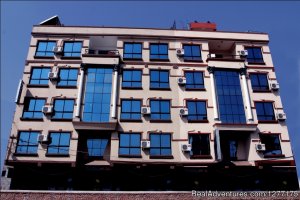 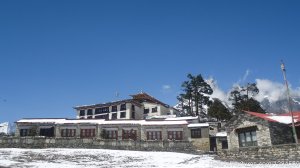 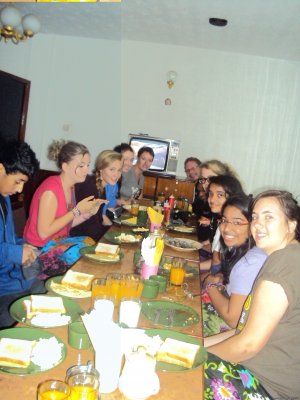 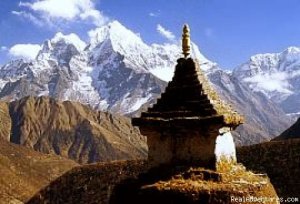 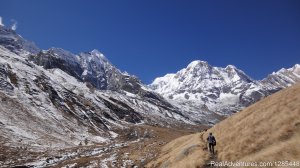 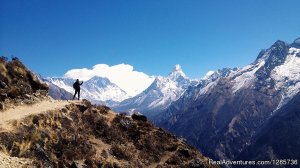 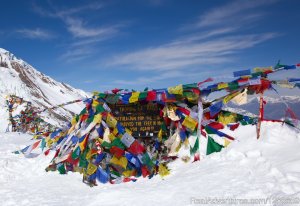 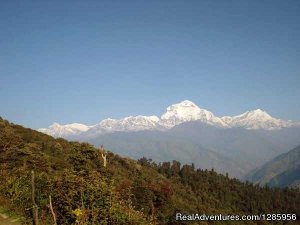 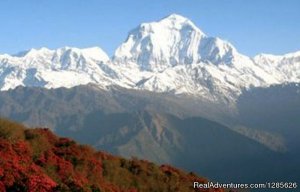 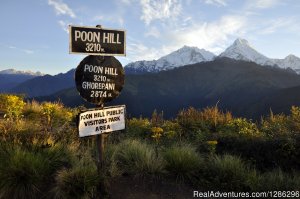 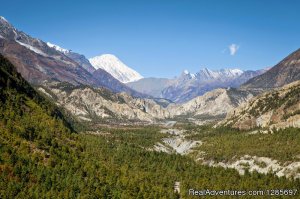 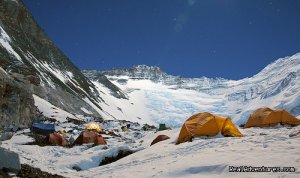