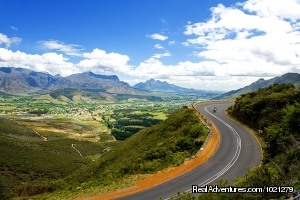 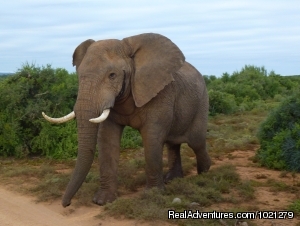 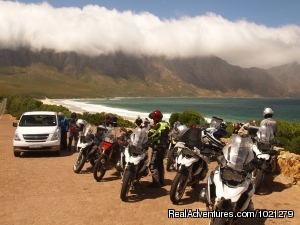 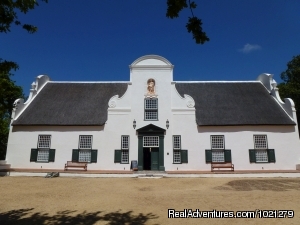 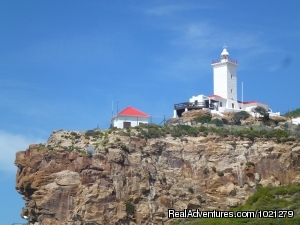 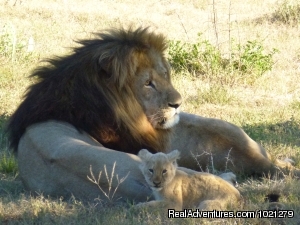 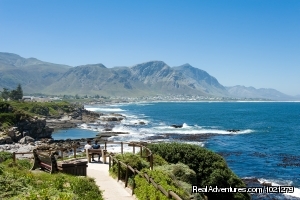 Starting at:
USD $6396 per trip
Sound like the place for you?Book Now
The Garden Route - South Africa's magnificent showpiece, is magical from end to end. The South African Saunter concentrates on this amazing area.

Combination & Juxtaposition:
Magic - a term we often hear from Rob while he is leading a tour. Why? Because so many of the places we go, so many of the things we do are, simply, magical. (a definition of magical; something that seems to cast a spell)

What makes it so? A spell is cast by combining something different or exceptional with something familiar. For example, the exceptional view of breathtaking mountains from the familiar seat of a bike. Crystal clear air allowing one to see forever. The emotional sensations transmitted to a rider heading down a special road. The joy of perfect weather on a day's ride. A good, hearty series of laughs shared with fellow travelers. You see? It is magical!

The Garden Route - South Africa's magnificent showpiece, is magical from end to end. The South African Saunter concentrates on this amazing area.

The prettiest city in the world?
Cape Town, perfectly situated on Table Bay, is our focus for the first two nights. A ride to the end of the Cape of Good Hope will leave visitors with the knowledge that this really is one of the prettiest cities in the entire world.

Mountains and motorcycles are a guaranteed magical combination, and as we ride through the Langeberg mountains on the way to Montagu the peaks get higher, the roads twistier. Montagu was cut off from the rest of the country by these same mountains until the middle 1800s when a tunnel was hand cut and a pass road opened. Now the journey is one of the most scenic in the country.

Orchards and vineyards surround Montagu, and we will have a chance to sample some of the superb South African wines as the side-stands come down and the "what I saw today" tales begin.

Ahhh... fashion:
Curious combinations - while Montagu grew thanks to fruit, Oudtshoorn grew thanks to the ostrich. For much of the 19th century the fashionable accessory for Europe's nobility was an ostrich feather. Oudtshoorn's millionaires were created by a long lasting fad! Beside the ostriches themselves, the magnificent homes built by the farmers are an impressive highlight of the town.

From the mountains to the crashing surf:
Better still, getting to, and from, Oudtshoorn requires riding through the Swartberg mountains. More perfect motorcycling!

Scenery in South Africa is stunning in its variety. Storms River, at its mouth with the Indian Ocean, mixes tall trees, crashing surf, waterfalls and perfect accommodation. This is a place that will remain in your memory simply because it is what it is.

It's Wild!
Think Africa and it is impossible to not imagine giraffe, elephants, lions, and the wildlife of so many adventure stories. In Addo a day spent at the Lilibela Game Preserve will likely bring you nose to trunk with these huge, intelligent beasts.

African elephant tusks are highly prized in the east. As a result, the continent's population is at serious risk. Reserves like Lilibela and nearby Addo offer a tiny buffer to this threat, while giving us the opportunity to see herds in a natural situation. There are few things as impressive as a full-grown bull elephant�"the largest land-mammal on the planet.

Lalibela consists of spproximately 18,500 acres and is home to the Big 5 (lion, elephant, rhino, buffalo & leopard) as well as other predators like cheetah, hyena, jackal & lynx. They are blessed with vast African plains and this is why they have multitudes of zebra, giraffe, warthog, impala, wildebeest, blesbuck and various other antelope species.

To be out in the bush, in the evening, when all the animals are active is unforgettable. Addo is another magical stop on the South African Saunter!

Moving from the Bush of the South Cape to the desert and desolation of the Great Karoo is a striking change. Like the Australian Outback, this immense, wide-open space overwhelms the senses. At Graaff Reinet enjoy a unique view of the night sky with uncountable stars punctuated by the Southern Cross.

Quaint enough for mom:
After experiencing it, it is time to move away from desolation back to the coast. In spite of its name, Wilderness, isn't quite that. Rather, it is a pleasant community with excellent swimming and surfing beaches, great bird watching in the reeds at the water's edge, and a relaxing pace of life. A perfect vacation stop, and a great place to have a break.

Go south, young man:
An important pin on anyone's map would be a southernmost point. Cape Agulhas is where that pin would be placed on a map of Africa, and your pin may land there after your stop in Arniston. This lovely seaside fishing village has been declared a national monument and its quaintness will surely keep your camera busy.

Wrap it up with more mountains:
Like the crescendo of a great symphony piece, the last two riding days of the Saunter ramp up the scenery and roads to end the tour with a breathless feeling. Stellenbosch, the penultimate stop, sits in a beautiful valley between the Simonsberg and Papegaaiberg mountains.

Formally a frontier town, this historic community is now a center of viniculture and tourism. It is a great jump off to the Drakenstein and Stellenbosch mountain ranges, where we spend the last day of riding on some of South Africa's very best roads.

The now familiar Cape Town skyline welcomes us back to where it all began, two weeks and ten thousand experiences ago. With this adventure under your belt you can now say that you know, first hand, exactly what magical actually is!